"American Idol," one of the many shows to be on hiatus amid the ongoing health crisis in the United States and other countries, is set to return to television on April 26 to finish out the current season, and filming is being done remotely using iPhones. 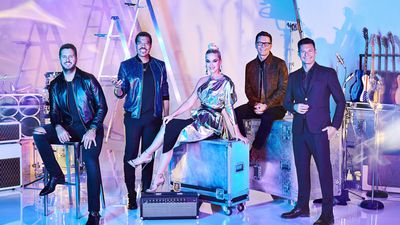 "American Idol" showrunner Trish Kinane told Deadline that over the course of the last few weeks, the show's producers have been working on a plan to allow contestants to film in their own homes. Each person was sent lighting equipment, wardrobe, and the latest iPhones for self-filming purposes.

Kinane called the new high-end iPhone models from Apple "amazing" and said she wouldn't be surprised to see them used in the studio in the future.

"These are kids who are really used to iPhone technology, they are really familiar with it and use it every day. In the end, we decided rather than send them some complicated camera that you really need a camera operator to use, we would go with the the technology that they're familiar with. These top of the range iPhones are amazing. It wouldn't surprise me if we were using iPhones in the studio in the future," she said.

Apple hardware like iPhones and AirPods have made many appearances on TV shows, videos, and webcasts filmed at home and shared by celebrities, TV presenters, musicians, and more.

For "American Idol," ABC is working "hand-in-hand with Apple." Rob Mills, ABC's SVP of Alternative Series, Specials & Late-Night Programming, said that this kind of home filming wouldn't have been possible five years ago.

"We are blessed to live in a day and age where we have technology, even if this had happened five years ago, I don't know if it would be possible. There is a real can-do spirit here that is exciting and exhausting, it's been fun to figure it out."

There will be four more "American Idol" episodes this season, which will see the 20 contestants whittled down across three episodes before the fourth episode's two-hour finale. The show will feature performances filmed at home with an ‌iPhone‌, along with appearances by the "American Idol" judges Katy Perry, Luke Bryan, and Lionel Richie and host Ryan Seacrest.

Rocko99991
I was hoping this lock down would thin the herd of bad shows, I was wrong.
Score: 6 Votes (Like | Disagree)

Sounds unhealthy. In Coronavirus times, it should be:

For "American Idol," ABC is working "at a safe 6-foot distance from Apple."

LegacyMacUser
Filmed on iPhones? No, it's recorded on iPhone. Film is not used in an iPhone – there's not enough room inside the unit. ;)
Score: 5 Votes (Like | Disagree)

American Idol just might be the trashiest TV show that currently exists.

When we have shows like "Too Hot To Handle" and "Tiger King," you're saying American Idol is "the trashiest TV show"? Really?

I'll bite. What is "trashy" about a singing competition?
Score: 4 Votes (Like | Disagree)

For "American Idol," ABC is working "hand-in-hand with Apple."

H3LL5P4WN
For a company so centered on music, why is Apple partnering with a show that has nothing to do with music and everything to do with corporate audio products?
Score: 3 Votes (Like | Disagree)
Read All Comments