"Home," a TV show about people who live in creative houses, today launched on Apple TV+, marking the debut of the service's first docuseries.

"Home" is described as a look at the imaginative dwellings of visionaries who challenge the conventional concepts of "home" and rethink how we live. 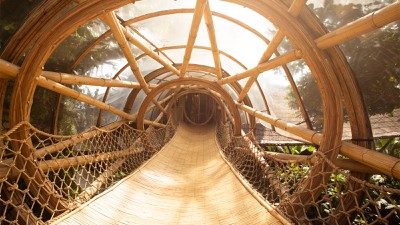 There are nine episodes in the series featuring different dwellings around the world in places like Sweden, Bali, Chicago, Hong Kong, Maine, India, Malibu, Austin, and Mexico. Each episode is around 30 minutes long.

The first episode of the series, "Sweden," features the home of a man who constructed a greenhouse over a log cabin, while other episodes feature a home made entirely from bamboo, a science fiction-themed house, a home made from handcrafted materials, and more.


The show is available now in the Apple TV app on iPhone, iPad, Macs, ‌Apple TV‌, and select smart TVs that include the ‌Apple TV‌ app. It is available to all ‌Apple TV+‌ subscribers.
Tags: Apple TV Shows, Apple TV Plus Guide
[ 56 comments ]

I just remembered how I didn't care enough to activate the free Apple TV+ year when I bought my 11 Pro. Speaking as a heavy Netflix/Prime binger, it's one of those things I don't even want for free.

Cool story bro. Totally irrelevant and no one gives a damn, but thanks for sharing...
Score: 16 Votes (Like | Disagree)

I just remembered how I didn't care enough to activate the free Apple TV+ year when I bought my 11 Pro. Speaking as a heavy Netflix/Prime binger, it's one of those things I don't even want for free.

ipedro
AppleTV+ is really filling out nicely. There’s something for everyone.

Offering it free to hardware buyers was a good decision to start building up a base of users. After year one, it’ll be worth paying for.

Apple really need to fill up the blanks with 3rd party contents, stream it for a limited time just like Netflix does. Maybe all Marvel movies for 3 months, or Game of Thrones complete series for 6 months, then replace it with another. Keep doing that and it'll keep me hooked. TV+ is a noob startup in the streaming world, and none of the show became a hit yet. Apple just gotta reach out to keep things interesting.

People need to let this idea go. In a couple of years there isn't going to be any third party content. Marvel Movies and Game of Thrones? Haven't you been paying attention? The owners of things like that are firing up their own streaming services and there'll be increasingly slim pickings for Apple and Netflix etc. as time goes on. Maybe in a few more years, when the weaker ones die off they'll go back to licensing again, but its not all that likely. They'll just get absorbed by the winners.

Besides, ATV+ strikes me as a bit of an antidote to Marvel movies. Not everyone's interested in Marvel stuff. Some of us are completely turned off by it, and by Game of Thrones and some of what Netflix is doing. Which is something Apple would know very well after selling movies and TV episodes direct to consumers for over a decade.
Score: 9 Votes (Like | Disagree)

Ar40
This is a BEAUTIFUL show. I watched some last night and felt so calm after. It's an amazing escape from my boring apartment and is giving me some ideas for where I want to live in the future.

It's a shame Apple barely promoted this - so far their docu-series have been beautifully shot and very good (See also Visible).
Score: 6 Votes (Like | Disagree)

ipedro
Just watched the first episode. This is great! Can’t wait for the next one and I hope to see more of this type of production on AppleTV+.
Score: 6 Votes (Like | Disagree)
Read All Comments

Friday July 23, 2021 9:37 am PDT by Juli Clover
Apple is developing an external display that includes an A13 chip with Neural Engine, according to a new rumor from 9to5Mac. The A13 chip with Neural Engine would presumably serve as an eGPU, though details are light at this time. Having a CPU/GPU built into the external display could help Macs deliver high-resolution graphics without using all the resources of the computer's internal chip....
Read Full Article • 212 comments

Friday July 23, 2021 8:07 am PDT by Sami Fathi
Yesterday, DigiTimes claimed that the upcoming iPad mini will feature a mini-LED display, but now, display analyst Ross Young is going at odds with that report, claiming that while the updated iPad mini continues to be on track for a release this year, it won't feature a mini-LED display. Young says he "confirmed" with Radiant Opto-Electronics, who DigiTimes claims would provide Apple with...
Read Full Article • 55 comments