Likely-accurate battery and RAM specifications for the new iPhone SE surfaced this morning in a Chinese Telecom spec sheet (via IndiaShopps). 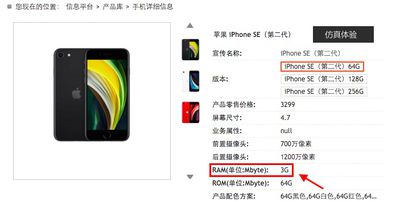 However, in typical fashion, Apple didn't disclose the new phone's battery capacity or RAM. Teardowns of the device should reveal these details in the coming days, but until then we have to trust that carrier listings are accurate.

China Telecom's listing claims that the new ‌iPhone SE‌ features 3GB of RAM. For comparison, the iPhone 11 series feature 4GB of RAM, suggesting Apple has put less memory in the ‌iPhone SE‌ to match the lower requirements of its single lens camera and other hardware capabilities.

According to the listing, the new ‌iPhone SE‌ has the same 1,821 mAh battery capacity as the iPhone 8, which it has effectively replaced in Apple's lineup. Given that Apple says the ‌iPhone SE‌ lasts "about as long as the ‌iPhone‌ 8," that number also sounds about right.

The ‌iPhone SE‌ comes in black, white and (PRODUCT)RED, and pricing starts at $399 in the United States with 64GB of storage, with 128GB and 256GB options available for $449 and $549 respectively. It will be available for pre-order beginning at 5 a.m. Pacific Time on Friday, April 17. The device will also be available for purchase at select Apple Authorized Resellers and carriers starting Friday, April 24 in the United States and more than 40 other countries and regions.

Honestly, it's not worth upgrading over the iPhone 8.

i disagree, but I agree that there won’t be many people upgrading from the 8 to it. It’s mostly for people in the 6/6s/7 world. From that realm it’s a fantastic upgrade at a fantastic price.
Score: 25 Votes (Like | Disagree)

PostApple2016BrainWash
Honestly, it's not worth upgrading over the iPhone 8.
Score: 23 Votes (Like | Disagree)

Wig321
Why isn’t there an increase in battery life with the newer processor?
Score: 16 Votes (Like | Disagree)

sickoagb
Disappointed with the battery life. I thought with the 3D Touch removal, there would be a slight increase, even if it was just 1/2 hours. The battery life on the 8 is just shocking.
Score: 13 Votes (Like | Disagree)

sundog925
Former iPhone 8 owner here. That battery was THE WORST apple has ever put out. Small, overheated constantly and the wireless seemed to take FOREVERRRR. returned one for a bad coil. Beautiful deep red color, terrible battery.
Score: 12 Votes (Like | Disagree)

ucfgrad93
I think that the SE has a couple of target audiences...

I think this new SE hit both of those targets very nicely.
Score: 12 Votes (Like | Disagree)
Read All Comments