Apple to Reopen First Store in South Korea on April 18

Apple is planning to begin reopening its retail stores beginning with its sole Apple Store in South Korea, located in Seoul's Gangnam district. 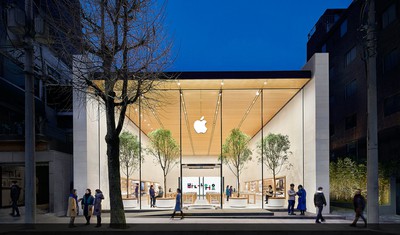 The store's page says that it will be opening at 12:00 p.m. local time on Saturday, April 18. It will operate on limited hours for the next several days, opening at noon and closing at 8:00 p.m. In a statement to Bloomberg, Apple said the store will focus on support rather than sales when it reopens.

Apple said in a statement that "South Korea has shown great progress during the spread of COVID-19," prompting the company to reopen its Seoul store on April 18. The location will operate on an adjusted schedule to begin with "to ensure customers and employees continue to stay healthy." Apple also said it will be focusing on support, rather than sales, to begin with.

"A focus for the store will be service and support at the Genius Bar," Apple said in a statement Thursday. "For customers who want to make a purchase, we have several options including ordering online for delivery or pick up in store."

Apple's retail locations outside of China have been closed since March 14, when Apple shut down all stores amid the global health crisis.

Apple plans to begin reopening stores in the United States starting in early May, with the company likely planning to relaunch stores on a rolling basis over a period of weeks based on local conditions and guidelines.

At the very least, Apple stores need to no longer be these insanely packed places where people obviously are going just to hang out and play. That’s hot to be shut down.

‘Social distancing‘ will be a very real thing, especially when you look at Apple stores moving forward. You won’t be seeing lines anymore in terms of ‘opening day’ releases, and there will probably be a limit amount of people allowed in the stores. And the reality is, that’s how it should be. Because this isn't something that we just will ‘go away’, normal is not a word we can associate any more Given the circumstances.
Score: 3 Votes (Like | Disagree)

Surprised this was that far down...

Baymowe335
Slowly, we will put this behind us.
Score: 2 Votes (Like | Disagree)

Surprised this was that far down...
Score: 1 Votes (Like | Disagree)

At the very least, Apple stores need to no longer be these insanely packed places where people obviously are going just to hang out and play. That’s hot to be shut down.
Score: 1 Votes (Like | Disagree)
Read All Comments

Friday May 7, 2021 1:51 am PDT by Tim Hardwick
An early look at an ongoing analysis of Apple's App Tracking Transparency suggests that the vast majority of iPhone users are leaving app tracking disabled since the feature went live on April 26 with the release of iOS 14.5. According to the latest data from analytics firm Flurry, just 4% of iPhone users in the U.S. have actively chosen to opt into app tracking after updating their device...
Read Full Article • 163 comments

Wednesday May 5, 2021 6:03 pm PDT by Juli Clover
The safeguards that Apple built into AirTags to prevent them from being used to track someone "just aren't sufficient," The Washington Post's Geoffrey Fowler said today in a report investigating how AirTags can be used for covert stalking. Fowler planted an AirTag on himself and teamed up with a colleague to be pretend stalked, and he came to the conclusion that the AirTags are a "new means...
Read Full Article • 410 comments