Apple in March updated both the MacBook Air and the iPad Pro, and with the ‌iPad Pro‌ increasingly positioned as a computer replacement, we thought we'd compare both new machines to see how they measure up and which one might be a better buy depending on user needs.

Subscribe to the MacRumors YouTube channel for more videos.
We're comparing the base model 12.9-inch ‌iPad Pro‌ and the base model 13-inch ‌MacBook Air‌. The base 12.9-inch ‌iPad Pro‌ features an A12Z chip with an 8-core CPU and GPU, 6GB RAM, and 128GB storage space. It's priced at $999, but there's no keyboard included, and a keyboard is a definite requirement for using an ‌iPad Pro‌ in lieu of a traditional notebook computer. 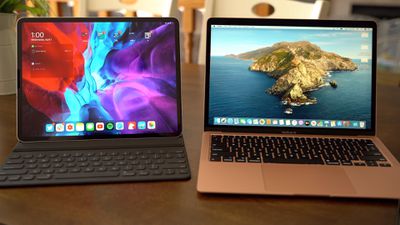 Keyboards can be cheap if you're using a simple Bluetooth solution, or expensive if you choose the $179 Smart Keyboard Folio. If you're holding out for the Magic Keyboard with trackpad that'll bring an even more MacBook-like experience to the ‌iPad Pro‌, expect to spend an additional $350 for the 12.9-inch version ($300 for the 11-inch model).

The base 13-inch ‌MacBook Air‌ features a 1.1GHz dual-core Core i3 processor and Intel Iris Plus Graphics, 256GB of storage, and 8GB RAM. It too is priced starting at $999, and doesn't require any additional purchases, though it's often worth paying extra to upgrade the processor and the RAM if you can afford it.

When it comes to raw performance, if you compare Geekbench scores, the ‌iPad Pro‌ comes out on top, and by a wide margin. Single-core scores for the i3 chip in the ‌MacBook Air‌ are typically right around 1070, while multi-core scores are around 2100.

iPad Pro scores, though, are right around 1,100 when it comes to single-core performance, and much more impressive in multi-core performance with scores closer to 4670. In raw performance, the ‌iPad Pro‌ is going to give you more bang for your buck, but operating system limitations are worth taking into account.

Both of these devices are designed for content consumption and creation, but are not ideal for some of the most system intensive tasks like 3D rendering or video editing. In general, though, they're both capable of the same kinds of basic tasks - browsing the web, coding, sending emails, writing documents, playing games, etc., but the ‌iPad Pro‌ is going to be better for gaming and it has features the ‌MacBook Air‌ is just lacking, such as the dual camera setup and LiDAR Scanner.

Given the faster processor, the ‌iPad Pro‌ is better if you do want to do things like edit videos, record music, edit photos, and more. It's quiet, it's fast, and it definitely has an edge over the ‌MacBook Air‌ for system intensive tasks. It's a wash when it comes to battery life as both offer 10 to 11 hours, but in terms of connectivity, the ‌iPad Pro‌ offers both WiFi 6 and a cellular option, useful for working anywhere.

As for design, both devices are portable and easy to take anywhere, but there are also a lot of differences to be aware of. You have a traditional notebook form factor with built-in trackpad and keyboard with the ‌MacBook Air‌, but the ‌iPad Pro‌ offers a touch-first experience. You can add a keyboard, of course, but it's still a much different usage experience.

Someone who has a long history working with a notebook form factor may have a harder time adjusting to the touch experience of the ‌iPad Pro‌, while someone who primarily works off of an iPhone or other touch device will be able to adjust to non-notebook life more quickly.

With trackpad and mouse support added in iPadOS 13.4, using an iPad is more like using a Mac notebook than ever, but so far, the trackpad experience just isn't as good as the built-in trackpad on the Mac. It's just not as simple to use, at least not yet. That could change when Apple releases its Magic Keyboard.

Choosing between the ‌iPad Pro‌ and the ‌MacBook Air‌ as a main machine for work and home use will come down to each individual's work habits, preferences, software requirements, and workflow. A multitasking heavy workload that requires multiple apps to be used at once won't translate well to an ‌iPad‌, but a job that requires more focus on a single app like writing or coding could work well on an ‌iPad‌.

Do you use an ‌iPad‌ as a main work machine in lieu of a Mac or PC? Do you prefer the ‌iPad Pro‌ over the ‌MacBook Air‌, or vice versa? Let us know in the comments.

calzon65
I think the comparison and discussion have merit, but regardless of hardware comparisons, in most cases, IOS is not a replacement for a substantial operating system like MacOS.
Score: 41 Votes (Like | Disagree)

Aluminum213
The iPadOS can do 1% of what macOS can do, that hasn’t changed and it doesn’t matter how powerful iPad is

bladerunner2000
Easy choice between the two... MacBook of course. Why would anyone want the gimped iPad?
Score: 14 Votes (Like | Disagree)

K-Funk
To me, the only justifiable reason to use an iPad as a computer is that you can't afford both an iPad and a Mac.

To each his own, I guess, but I find even web browsing to be tedious on an iPad. If I tried to use an iPad to do actual work, I would go insane.
Score: 12 Votes (Like | Disagree)

Idioteque_
Seems like an A14 MacBook Air would be the big winner
Score: 11 Votes (Like | Disagree)
Read All Comments