Apple today released the first betas of upcoming iOS and iPadOS 13.4.5 updates, and while the new software appears to focus primarily on bug fixes, there's at least one new feature. 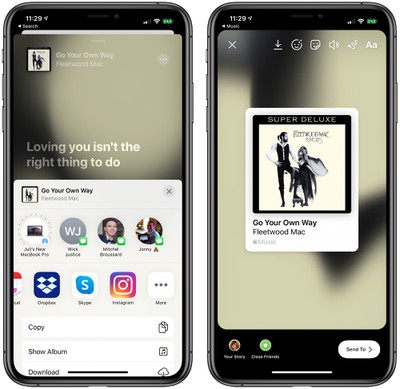 When listening to a song in Apple Music, tapping on the Share button and then selecting Instagram generates a Story with the song title and album name, plus a matching animated background.

9to5Mac says that once a song is shared on Instagram, other people should be able to tap on the song name and then listen to it in the ‌Apple Music‌ app, but we were unable to get this feature to work, perhaps because the feature is still being beta tested.

Spotify has a similar feature where song titles can be shared on Instagram in a Story that displays album artwork and a matching background, but no music plays and there's a very small clickable link to open a song in Spotify, so it's possible the ‌Apple Music‌ feature will work similarly.

LOL. 6 months in and iOS 13 is the most bug ridden release I have ever experienced.

spartan1967
Enough with the new features already Apple. Please fix the bugs plaguing the ones you already have out!
Score: 2 Votes (Like | Disagree)

spartan1967
LOL. 6 months in and iOS 13 is the most bug ridden release I have ever experienced.
Score: 2 Votes (Like | Disagree)

Populus
Cool! But does it solve the VPN security flaw and other pending issues like that one where Settings app crashes when accessing via the Bluetooth 3D touch menu?
Score: 2 Votes (Like | Disagree)

Enough with the new features already Apple. Please fix the bugs plaguing the ones you already have out!

Let's not judge before we know whether the bugs were fixed or not ...
Score: 1 Votes (Like | Disagree)

LOL. 6 months in and iOS 13 is the most bug ridden release I have ever experienced.

Well I guess some people just have bad luck. I use the developer betas and didn't really experience any huge annoyance so far.

EDIT: But of course Apple should fix the damn bugs already ...
Score: 1 Votes (Like | Disagree)
Read All Comments