Apple's development of upcoming products is progressing as usual despite the fact that Apple employees around the world are working from home, according to a new report today out from Bloomberg. 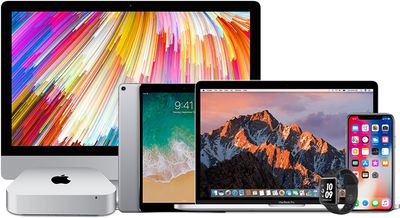 Apple is still working on new versions of the HomePod, Apple TV, MacBook Pro, budget iPads, Apple Watch, iPhone, and iMac, all of which could be released "as early as later this year" and have been previously rumored for release in 2020. Apple's software updates are also on track and are expected to be debuted in June at a digital version of WWDC.

Along with this information about Apple's product development plans, Bloomberg highlights many of the same telecommuting challenges shared earlier this morning in a report from The Information. Though work is progressing on new products, there have been some minor hardware development setbacks.

Some employees who do work that requires hands-on development are still being allowed into Apple's Silicon Valley offices, but in other parts of the world like Italy, Germany, and Asia, stricter work restrictions have prevented that from happening. Apple has put a heavy emphasis on confidentiality while employees are working from home, letting them know that it's "critical to keep confidential work confidential."

Apple has been allowing engineers to take home early versions of future devices since March, which is normally not allowed, and there is heavy oversight.

Taking home a future product requires the green light from the vice president of an employee's organization. That list of staff with future devices at their homes also is sometimes reviewed by Apple's senior vice presidents, the management team run by Chief Executive Officer Tim Cook.

Apple has also "clamped down" on which employees are able to take home future versions of new software, including iOS 14, which has already leaked. Employees working on iOS 14 and other software updates must also receive approval from Apple's executive team.

Employees at Apple Park, Infinite Loop, and other Bay Area offices could be working at home through at least May 1, as the Bay Area is expected to extend its shelter in place mandate. When other offices around the world reopen will depend on local guidelines.

ONLY someone who hasn't worked in Engineering AND/OR manufacturing would believe that !
Score: 10 Votes (Like | Disagree)

jhowarth
Apple needs to update the MacMini ASAP to Tiger Lake at 10nm to get the TDP back down to 25 watts.
Score: 8 Votes (Like | Disagree)

ONLY someone who hasn't worked in Engineering AND/OR manufacturing would believe that !

Anyone who says anything is progressing normally in any industry at this time should not be believed. These are truly odd times we live in.
Score: 5 Votes (Like | Disagree)

Sunday December 4, 2022 7:38 am PST by Joe Rossignol
Mass shipments of Apple's long-rumored AR/VR headset may be delayed until the second half of 2023 due to unspecified "software-related issues," according to the latest information shared today by tech analyst Ming-Chi Kuo. Apple headset render by Ian Zelbo Kuo said mass shipments of components for the headset are still likely to begin in the first half of 2023, but he believes that mass...
Read Full Article • 145 comments

Friday December 2, 2022 10:54 am PST by Juli Clover
Google is continuing on with its attempt to convince Apple to adopt the RCS messaging standard, publishing a new "it's time for RCS" blog post. Promoted heavily by Google, RCS or Rich Communication Services is a messaging standard that is designed to replace the current SMS messaging standard. It provides support for higher resolution photos and videos, audio messages, and bigger file sizes, ...
Read Full Article • 630 comments

Monday December 5, 2022 11:44 am PST by Juli Clover
Due to production issues at Apple supplier factories in China, the iPhone 14 Pro and iPhone 14 Pro Max are backordered and basically out of stock at every store. If you were planning to gift or receive an iPhone 14 Pro model for the holidays and didn't already get one, you're basically out of luck because they're gone until late December. Subscribe to the MacRumors YouTube channel for more ...
Read Full Article • 184 comments