An original Apple Computer Inc. sign created around 1978 with Apple's well-known rainbow logo is set to be auctioned off later this week. 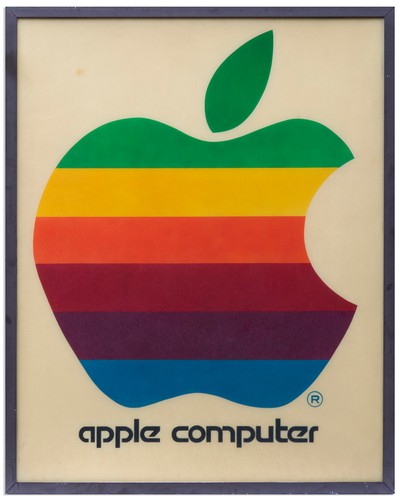 Measuring in at four feet by five feet, the sign is said to be one of the earliest Apple retail signs and was displayed by an Apple authorized reseller who first learned about Apple after attending a 1976 computer conference.

The sign is yellowed and the description says there are "a few surface marks," but overall, the rainbow colors are said to be bright and in good condition. The sign will be auctioned by Nate D. Sanders Auctions on March 26, and the starting price is $20,000.

I do wonder if that is a font or just done by a designer? That would make for an awesome font.

Bollockser
Neat to see how it was geometrically perfected later on, versus this wonky-proportioned early version up for auction.

kc2kth
As I recall Beagle Bros had a full font set based on this sample available for the Apple II series back in the day. That’s the closest I know of it being an “actual” font.
Score: 4 Votes (Like | Disagree)

Neat to see how it was geometrically perfected later on, versus this wonky-proportioned early version up for auction.


It's charmingly humble. The complete opposite of Apple today.
Score: 4 Votes (Like | Disagree)

MDF314159265
I think this original version looks fantastic! The Apple shape especially - it isn’t “overthunk” to be over-complex to make some marketing grad feel like their education is actually worth something... it’s just a simple design, with simple coloring that represented something “different” from status quo. That’s far more meaningful and far more valuable than conforming to so-called “professional design expectations.”
The old logo truly represents the pioneering spirit of Apple.
This sign will look passively fitting in the game room or office space of someone who has been very ‘financially’ successful.
Score: 3 Votes (Like | Disagree)
Read All Comments