Announced earlier this week, Apple's new Powerbeats are now available through its online store for $149.95 in black, white, and red. 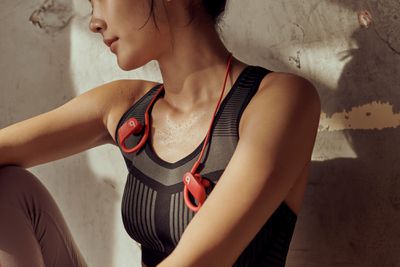 For more details about the new Powerbeats, read our announcement post earlier this week.

I've had them for two weeks now and like them a lot.

I purchased them mostly for phone calls now that I'm making more of them and they tend to be long - 1 1/2 to 2 hours. They work really well for that. I'm also using them more for music for when my wife wants to watch TV, and being in the same room, I can just listen to music and read, or use my laptop.

The audio quality is much better than AirPods as the tips seal inside the ear. And they fit well.

I have no regrets with my purchase and would purchase them again!

I want them because 1) red and 2) I've had APP on my wish list for a while but could never really justify them, and definitely can't since i replaced a really old pair of beats studios with a pair of WH1000XM3.

I'm on the fence a little about buying these to replace both my 1st gen airpods and my powerbeats 2 i found in a drawer a couple months ago, since both technically work even if battery life sucks a bit... while i'm stuck at home, it's enough. but I'm really hoping one of them dies soon. It's definitely a question of when, not if, I pick these up.
Score: 1 Votes (Like | Disagree)

So, does anyone have these? I'm curious what people think of the fit. I realize every one has different fit requirements, but I wonder if people find the strap and the over-the-ear design better or worse than AirPods. These seem like they might be preferable for sports for some people.

What about the sound quality? I don't like overemphasized bass for example.

They're exactly the same as the powerbeats pro. Speaking as someone who own the powerbeats 3 (and plans on buying these), I've had mine since 2016 and they were 100% worth the money. I've used them in the gym, running (races too) and biking. I like the wire because it it's less of a chance for me to lose them. Plus when someone comes up to talk to me I don't have to worry about where to put them since they can hang.

Sound wise, I think they're really good. Nowhere near as bass heavy as the bigger over the ear beats. Also, just going to say it, I really thing the airpods are wildly overpriced. They're just earpods, but wireless. So it's still that same sound that sounds like everything is in a tin can. The powerbeats (and powerbeats pro if you really dont want the wire) are a far better purchase on just sound alone.

But you're right on the money about them being preferable for sports.
Score: 1 Votes (Like | Disagree)
Read All Comments