Upcoming Low-Cost iPhone Rumored to Come in 4.7 and 5.5-Inch Size Options to Replace iPhone 8 and 8 Plus

Apple is widely rumored to be working on a 4.7-inch low-cost iPhone that resembles the iPhone 8, but code found in a leaked version of iOS 14 suggests that Apple could also release a larger 5.5-inch version of the new low-cost iPhone. 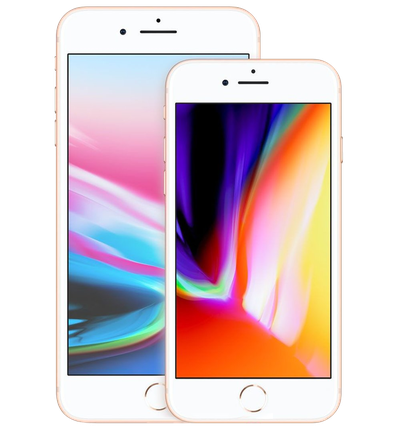 The current iPhone 8 and 8 Plus, which will be replaced by new low-cost options that with the same design
In a report that refers to the new 4.7-inch iPhone as the "iPhone 9," 9to5Mac suggests that Apple is also working on a 5.5-inch "iPhone 9 Plus" that would be sold alongside it. There is no word yet on what these iPhones will be called, and other rumors have referred to this low-cost device as the "iPhone SE 2."

Multiple past rumors have indicated that though the new low-cost iPhone will have a design similar to the iPhone 8, it will feature the same A13 processor used in Apple's current iPhone 11, 11 Pro, and 11 Pro Max. We can expect the rumored 5.5-inch version to have the same upgraded processor.

We've also heard that Apple is planning to sell the 4.7-inch low-cost iPhone for $399, and if that's the case, the 5.5-inch version could be priced accordingly at $499. Apple was said to be planning to release the new low-cost iPhone option in the first half of 2020, perhaps as early as March, but it is not clear how the coronavirus outbreak has affected the company's plans.

It's worth noting that there has been no prior mention of a 5.5-inch low-cost iPhone to be sold alongside the 4.7-inch iPhone that we've seen rumored time and time again, so Apple's plans here are not entirely clear.

We have, however, heard a rumor from reliable Apple analyst Ming-Chi Kuo who suggests Apple is working on an "iPhone SE 2 Plus" with a full-screen design and no Face ID, meaning Touch ID is built into the power button on the side. Kuo says that this model will be 5.5 or 6.1 inches and will be released in the first half of 2021.

9to5Mac's report suggests the 4.7 and 5.5-inch iPhones referenced in iOS 14 code have Touch ID Home buttons and therefore, neither one is the higher-end "plus"-sized iPhone referenced by Kuo, but there is still some confusion around these two reports.

GeoStructural
Such a fragmented line of devices. And the reason is simple: declining sales numbers. iPhone reached “peak” a few years ago, Apple admitted it and went so far as to stop releasing sales figures, something they proudly flaunted years before.

With all these cheaper iPhones they are basically trying to capture sales on the lower segments. The thing is, most manufacturers offer better value at those price points. Many people in Asia, Africa and Latin America find iOS too restrictive and these iPhones too old looking, with huge notches and few selling points compared to the premium devices, other than price.

If Apple really wants to dominate all segments they have to consider a redesign, a modern looking, compact, small device with good features and a competitive price point rather than recycling this old iPhone 6 design year after year and calling it new or SE.
Score: 20 Votes (Like | Disagree)

munpip214
Thanks Apple but can we get an iPhone 11 Mini instead?
Score: 13 Votes (Like | Disagree)

drzen
It's kinda sad and hilarious at the same time, that the cheapest budget Chinese smartphones have the near-bezelless look, but here Apple still thinks flogging this outdated design is somehow OK.
Score: 7 Votes (Like | Disagree)

zorinlynx
Wow, this is going to make the "TouchID forever!" crowd who have Plus-sized phones VERY, VERY HAPPY. I'm all for that as not everyone cares for FaceID and people should have options.
Score: 6 Votes (Like | Disagree)

All these different numbers and models are going to start getting confusing to many people.

This feels like the nineties when Apple cranked out more and desktop models with overlapping specs. The one thing Jobs did first was to simplify the product lines so the choice was much more clear. Seems Apple needs another effort at pruning the number of products.
Score: 5 Votes (Like | Disagree)
Read All Comments