Earlier this week we picked up a Samsung Galaxy S20 Ultra and did a feature overview to see if it's worth $1,400, but we also thought we'd take a deeper look at Samsung's newest smartphone to see how the cameras measure up to the cameras in Apple's iPhone 11 Pro Max. 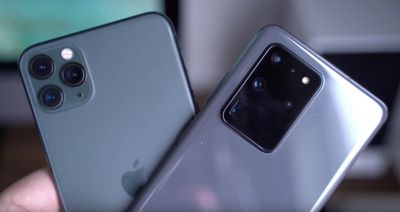 When it comes to standard photos using the three different lenses on each camera, we actually preferred the iPhone images for the most part because the iPhone offered more balanced color and better dynamic range, but with high-end smartphone cameras, a lot comes down to personal preference.

The S20 Ultra seems to be overexposing highlights in images with the sun and clouds, resulting in too much contrast. In images with less dynamic lighting, the results are closer and both look great.

The Galaxy S20 Ultra has some bells and whistles worth pointing out, such as a 100X "Space Zoom" feature. The iPhone 11 Pro Max maxes out at 10X digital zoom. The S20 Ultra clearly wins here, though you're not going to get a lot of use out of 100X zoom photos.

What is impressive, though, is photos taken with the 30X zoom feature. Samsung's 30X zoom pictures are crisper and clearer than Apple's 10x zoom photos.

There's also a "Single Take" feature that takes photos and videos from different angles and then spits out a bunch of different options like Boomerang-style videos, pictures with filters, videos with music, and more, so you have this kind of auto editing feature that can produce some interesting photo and video options you might not have thought to do on your own.

We do need to mention that massive 108-megapixel camera. It definitely has focus issues at the current time, and it's hard to get it to focus.

When it does work, it can provide sharp, detailed photos that are great if you need to crop in, and it has great depth of field for some nice background bokeh.

A 108-megapixel camera produces massive file sizes, so this isn't a lens you're going to want to use often. Luckily, Samsung did built in a feature that lets it take more reasonable 12-megapixel photos.

Both phones have a Night Mode, and both Night Modes work fairly well. On the Galaxy S20 Ultra, it's a mode you need to enable that's not turned on by default, which is a bit of a hassle.

The iPhone seems to have better HDR processing and delivers a more usable photo in extreme low lighting conditions. In situations with just a bit more light, though, it's a wash - both produce nice images.

One of the Galaxy S20 Ultra's major new features is 8K video, which is higher quality than the 4K video offered by the iPhone. 8K video from the S20 Ultra looks great, but image stabilization is poor, which means the 8K video is not as good as it sounds on paper.

When comparing 8K video from the S20 Ultra to 4K video shot on the iPhone 11 Pro (both at 24 frames per second because that's the max for the S20), the S20 Ultra's crop factor, rolling shutter, and lack of stabilization are highly noticeable.

Pitting 4K video against 4K video (at 60fps), both cameras perform similarly in terms of stabilization and focus, though the iPhone 11 Pro Max seems to be just a bit more stable. Both are just about equal, though.

You might think the 40-megapixel camera is significantly better, but we didn't see a whole lot of difference between the S20 Ultra and the iPhone 11 Pro Max. Samsung does have a "beauty mode" that we turned off, while the iPhone has no similar mode that can be toggled on.

In a nutshell, as with most high-end smartphone camera comparisons, there's no crystal clear winner. Both the Galaxy S20 Ultra and the iPhone 11 Pro Max have good cameras that are capable of capturing some amazing photos in good lighting conditions.

The iPhone wins out when it comes to dynamic range and video stabilization, but the S20 has better portrait mode photos. Standard point and shoot images are going to come down to personal preference, so make sure to watch the video to see all of our comparisons.

now i see it
This is like comparing a fast PC with a fast Mac. They have little in common because of the differences in the OSes. After using android for a bit, I'd never use an android phone as my only phone regardless of how superior the hardware was. Doesn't matter how good the camera or SOC or display is if you don't like the OS.
Score: 9 Votes (Like | Disagree)

Dan Holmstock
Wow have to say the iPhone IMHO blows this thing out the water. The ONLY thing I can give Samsung kudos for is that 30x zoom, that was actually pretty darn good. But paying 1400 for a phone that is NOT better than the current model iPhone? no thanks. Full disclose i use Android now, as I go back in forth eavery other year it seems.
Score: 8 Votes (Like | Disagree)

Skin tone looks more healthy on the Samsung while Apple has more of a hepatitis color.

LOL, i love these subjective tests, I actually thought the Samsungs produced more of a jaundice color. I previewed this article on my 2015 MBP.
Score: 7 Votes (Like | Disagree)

Relentless Power
Anyone in this thread can nitpick the smallest indifferences/features about these cameras, let’s look at it like this, they both take amazing photos/videos. General consumers are never going to be able to differentiate the differences between Samsung/Apples top-of-the-line smart phones.

I’m always stunned that people (On this site) that just can’t appreciate technology from both sides of the competition versus slandering one over the other, when both of these smart phones have amazing cameras.
Score: 5 Votes (Like | Disagree)

BigMcGuire
There's a few that I like the Samsung better, but most of them I like the iPhone 11 better. These comparisons are always fun. Whenever I do any of my own, I find the slightest movement, slightest press on the screen to focus changes the photo completely. That zoom ability would be handy.
Score: 5 Votes (Like | Disagree)

EatinPonies
Why do Android phones do the mirrored selfie-cam thing? Drives me nuts.
Score: 4 Votes (Like | Disagree)
Read All Comments