Apple and Johnson & Johnson today announced a new study that aims to gather more information surrounding atrial fibrillation and other conditions tracked by iPhone and Apple Watch. The "Heartline Study" will include an ‌iPhone‌ app, and explores whether health tracking features of ‌iPhone‌ and heart health features on Apple Watch can improve health outcomes. 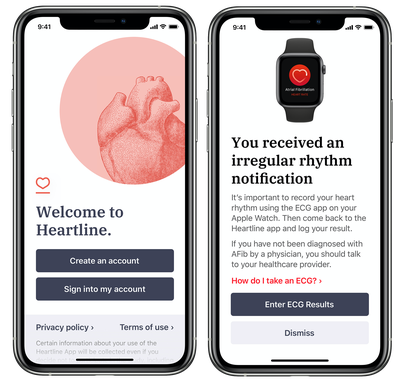 The study is specifically aimed at individuals over 65 years of age. Apple and Johnson & Johnson are looking to see if Apple's health tracking technology can help reduce the risk of stroke thanks to earlier detection of atrial fibrillation, which is a leading cause of stroke in the United States and detectable with the Apple Watch's ECG feature.

The main issue with atrial fibrillation is that it is difficult to diagnose, due to the lack of physical symptoms in most patients. With Apple Watch, watchOS can alert users to a potential AFib event even if they are unaware of what's happening to them.

"Apple technology is making a meaningful impact on scientific research through the powerful capabilities of ‌iPhone‌ and Apple Watch, all with privacy at the center of the participant experience," said Myoung Cha, Apple's Head of Health Strategic Initiatives. "The Heartline Study will help further understanding of how our technology could both contribute to science and help improve health outcomes, including reducing the risk of stroke."

Those interested in the study must be 65 or older, a U.S. resident for the duration of the study, have traditional Medicare, own an ‌iPhone‌ 6s or later (with iOS 12.2 or later), and agree to provide access to their Medicare claims data. Once randomized participants are selected, they will be divided into two groups: one will only use the ‌iPhone‌ app and the other will use the ‌iPhone‌ app in addition to obtaining an Apple Watch. The study will last three years.

Apple and its devices regularly participate in scientific studies, most recently at Stanford Medicine with the "Apple Heart Study." This study began in 2017, and in November 2019 Stanford Medicine published results that ultimately determined the Apple Watch can successfully detect atrial fibrillation.

Hodar1
My wife has had 5 ischemic stroke ('https://www.bing.com/search?q=ischemic+stroke&FORM=AWRE')s, anything - and I do mean ANYTHING, that can help prevent someone else from going through this, is a gift from God. You truly have no idea how much you have, until it's gone.
Score: 14 Votes (Like | Disagree)

jwh49
It was my Apple Watch that alerted me to A-fib last October, thank God!
Score: 11 Votes (Like | Disagree)

Good research by a marketing driven company? First question should be: how does this ‘study’ increase the sales (profit) of these companies?

J&J in particular happens to be extremely infamous for their rather shameless marketing of pharmaceuticals. Pardon me if I’m not leaping at the opportunity to celebrate.
Score: 3 Votes (Like | Disagree)

Apple should make ECG available to the rest of the world first... (not available in Mexico -or anywhere in LatinAmerica for that matter- yet...)

It's not up to Apple. It's up to the regions regulators. In the U.S. the Food and Drug Administration (FDA) had to approve the use of the AW4 as a medical device.
Score: 3 Votes (Like | Disagree)

Stevez67
Good research, if done correctly. I miss the cut-off by a couple years or I'd be all in.
Score: 2 Votes (Like | Disagree)
Read All Comments

Friday May 7, 2021 1:51 am PDT by Tim Hardwick
An early look at an ongoing analysis of Apple's App Tracking Transparency suggests that the vast majority of iPhone users are leaving app tracking disabled since the feature went live on April 26 with the release of iOS 14.5. According to the latest data from analytics firm Flurry, just 4% of iPhone users in the U.S. have actively chosen to opt into app tracking after updating their device...
Read Full Article • 206 comments

Friday May 7, 2021 6:55 am PDT by Sami Fathi
According to Apple leaker Jon Prosser, Apple's upcoming release of the MacBook Air will feature various colors, similar to the colors in the newly released 24-inch iMac. In the latest video of his YouTube channel Front Page Tech, Prosser says the same source who accurately provided him information on the first Apple silicon iMac coming in colors has told him that he recently saw a prototype...
Read Full Article • 324 comments

Friday May 7, 2021 2:07 pm PDT by Juli Clover
Amazon today announced that it is teaming up with Tile to add Amazon Sidewalk integration to Tile's Bluetooth trackers. Amazon Sidewalk, for those unfamiliar, is a network of Amazon Bluetooth devices that's designed to improve the connectivity of devices like the Ring and Amazon Echo. Tile will now be joining Amazon Sidewalk, and through this integration, Amazon Echo and Ring devices will be ...
Read Full Article • 149 comments