Malwarebytes: Macs Outpaced PCs in Number of Malware Threats Detected Per Endpoint in 2019, But Most Are Adware

Antivirus software developer Malwarebytes today shared its State of Malware Report for 2020 [PDF], which suggests that Mac malware is growing much more common. 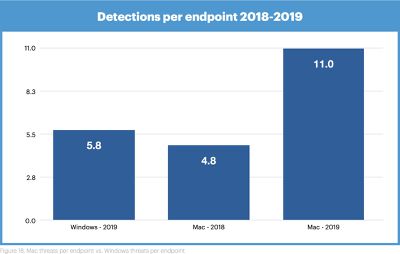 Malwarebytes says that there was a 400 percent increase in the overall prevalence of Mac threats in 2019, but part of that increase is attributable to an increase in the Malwarebytes for Mac user base, which is why the threats per endpoint metric was used for comparison purposes. Malwarebytes claims that the average number of threats detected on a Mac has surpassed Windows "by a great deal."

This means that the average number of threats detected on a Mac is not only on the rise, but has surpassed Windows--by a great deal. This is likely because, with increasing market share in 2019, Macs became more attractive targets to cybercriminals. In addition, macOS' built-in security systems have not cracked down on adware and PUPs to the same degree that they have malware, leaving the door open for these borderline programs to infiltrate.

This data only includes threats detected by the Malwarebytes software, of course, and it is limited to Mac users who have Malwarebytes installed. Many Mac users may not install antivirus software like Malwarebytes until there's a sign of something wrong, so it's important to take that into account when viewing these numbers.

Adware overall was more aggressive in 2019, targeting consumer and business endpoints on Windows, Mac, and Android devices. There were a total of 24 million Windows adware detections and 30 million Mac detections, with the top consumer threat detections belonging to adware families.

According to Malwarebytes, the Mac threats appeared at the top of its overall threat detections for the first time. The number one Mac threat detected was a family of adware called NewTab, installed as a browser extension or as an app. NewTab aims to redirect searches on the web to earn illicit ad revenue.

Most Mac threats are not as dangerous as some of the threats detected on Windows machines and consist of adware and potentially unwanted programs. The most common traditional Mac malware family, OSX.Generic.Suspicious was far down on the list of Mac-specific malware detections in the 30th spot.

Potentially unwanted programs include "cleaning" apps like MacKeeper and MacBooster, along with apps like Advanced Mac Cleaner, Mac Adware Cleaner, and others. Of all Mac threats, only one incident used a technique other than tricking the user into downloading and opening something they shouldn't.

That is the incident in which Coinbase, and several other cryptocurrency companies, were targeted with malware that infected systems through a Firefox zero- day vulnerability. Affected systems were infected with the older Wirenet and Mokes malware. This was the first time such a vulnerability had been used to infect Macs in any significant way since 2012, when Java vulnerabilities were used repeatedly to infect Macs (until Apple ripped Java out of the system, ending the threats).

According to Malwarebytes, adware and unwanted problems are becoming a more noticeable nuisance to Mac users overall, and Mac users can "no longer say that their beloved systems are immune from malware."

don’t be so paranoid. Honest question. Would you believe anyone that would present data that comes to a conclusion that is against your current belief of mac security?

I would have to look at the data and where the data came from before making judgements like any sane human being.

I mean, this stuff has been going on for decades. Cocacola sponsors many scientific studies. They get to review the results and squash any report that makes Cocacola look bad and release the ones that make them look good. Companies with an interest in oil are releasing scientific reports that electric vehicles emit more carbon into the air (indirectly by electricity generation from coal) than gas vehicles which is simply not true. Do I need to go on?

Keep in mind, I never said "THEY ABSOLUTELY RELEASED FAKE DATA". I simply said I would prefer the data to come from an independent company.
Score: 8 Votes (Like | Disagree)

And of course is immediately discredited in your eyes, never mind that a company who's business is to protect against malware would be perhaps the most knowledgeable about malware threats :rolleyes:
Score: 6 Votes (Like | Disagree)

Could you elaborate on this one?

Just cleaned out a system that had malicious profiles installed the other day. There is a pane in System Preferences called “Profiles” that contains a bunch of, well, profiles. It's normally not visible, and I'm honestly not sure whether it's a legitimate pane or something installed by malware. In any case, it somehow allows the OS to control certain aspects of various applications; in this case, it set the default search engine for Google Chrome to some adware site. Attempts to change that setting in Chrome failed, with Chrome stating that the search engine setting was enforced by the network administrator. Anyway, after deleting all of the “profiles” in the Profiles pane, the search engine enforced setting was released, and I was able to reset it to the default of Google (so much for eliminating adware…). Interestingly, once the profiles were all removed, the Profiles pane disappeared from System Preferences.

The insidious part is that there was also apparently a startup .plist that installed a new copy of the profile; I'm guessing that is the reason why I saw the same profile installed 8 or 9 times (once for every reboot since the malware had been activated). I only discovered that because I decided to install and run Malwarebytes, which I have to say did its job in this case, and for free at that (they charge for continuous monitoring or something, but the free version is perfectly adequate for detecting and removing malware). Malwarebytes was able to detect and remove the malicious .plist, and I'm reasonably confident that it was purged from the system entirely.

Not trying to sound like a shill for Malwarebytes here, but I was actually pretty impressed. I wouldn't pay for it myself, but I can see paying for a subscription for someone who is less computer-savvy, if only so you don't have to spend time cleaning crap like that out on the regular.
Score: 6 Votes (Like | Disagree)

danielwsmithee
This doesn’t surprise me at all. I’m actually surprised the numbers aren’t even higher for Macs.

Most of the Mac users I know only install a Mallware removal tool if they suspect they are already infected.

Most of the windows users I know install one by default.

I would expect the number of threats per end point to be significantly higher due to this behavioral difference.
Score: 5 Votes (Like | Disagree)
Read All Comments