Wednesday February 5, 2020 1:43 pm PST by Juli Clover
The Apple Watch outsold the entire Swiss watch industry by a wide margin in 2019, according to new data shared today by Strategy Analytics. 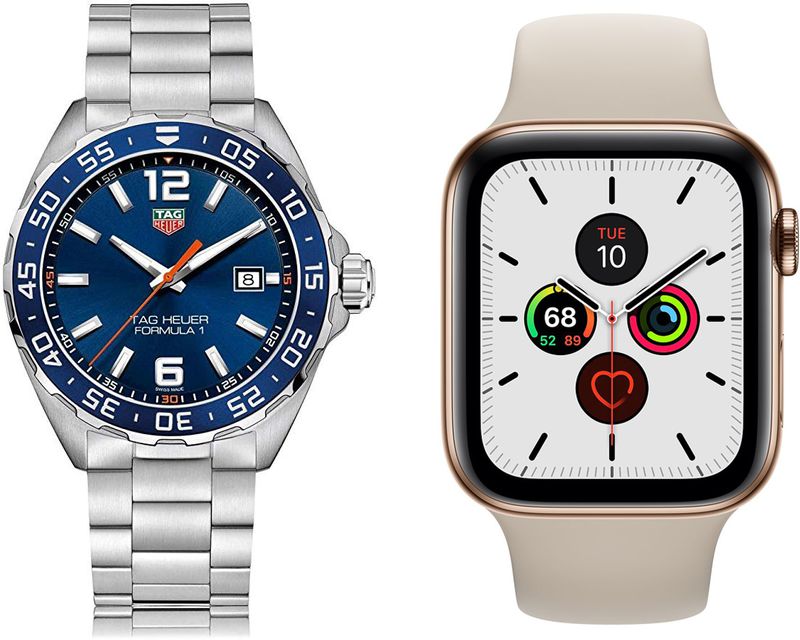 Comparatively, the Swiss watch industry (which includes all Swiss watch brands) is estimated to have shipped a total of 21.1 million units worldwide in 2019, dropping 13 percent from the 24.2 million watches shipped in 2018.

According to Strategy Analytics, the ‌Apple Watch‌ is "wildly popular" in North America, Western Europe, and Asia due to its user-friendly tech, sticky apps, and attractive design. Analog watches, meanwhile, remain popular with older consumers, but young buyers prefer smartwatches and computerized wristwear.

Traditional Swiss watch makers, like Swatch and Tissot, are losing the smartwatch wars. ‌Apple Watch‌ is delivering a better product through deeper retail channels and appealing to younger consumers who increasingly want digital wristwear. The window for Swiss watch brands to make an impact in smartwatches is closing. Time may be running out for Swatch, Tissot, TAG Heuer, and others.


Apple beat Swiss watch shipments with its own ‌Apple Watch‌ shipments during the holiday quarter of 2017, but 2019 marks the first full year where Apple has shipped a larger number of Apple Watches.

90% of the time I see someone wearing an Apple Watch, I wonder, sometimes aloud, WTF do they need notifications on their wrist for.

They look ridiculous - they're the Pager of the current generation. Most people who had a pager them kept them as a fashion accessory.

Conspicuous consumption of a device that depreciates to $0 in 5 years. TOTAL waste of money.

I always enjoy reading comments like these, makes me laugh.

I remember people said the exact same thing about the iPod, iPhone, iPad, AirPods... And all of these products came BEFORE Apple turned into a one trillion dollar company.
Rating: 48 Votes

90% of the time I see someone wearing an Apple Watch, I wonder, sometimes aloud, WTF do they need notifications on their wrist for.

They look ridiculous - they're the Pager of the current generation. Most people who had a pager them kept them as a fashion accessory.

Conspicuous consumption of a device that depreciates to $0 in 5 years. TOTAL waste of money.

90% of the time I see someone walking around with their face buried in their phone I wonder if they just cant afford an Apple Watch and cut that cord.

Or maybe its just because I come from people that actually do work, pagers never were a fashion accessory for them but a vital communication tool. Likewise the watch has a role for those that can appreciate it.
Rating: 33 Votes

With a $199 option, it’s no wonder. Talk about sucking up all the oxygen in the room... similar to $159 AirPods. Excellent product and entry level pricing. It’s very difficult for anyone else to compete, especially if a customer is already in the ecosystem.


The people who don't want to disturbing everyone with their stupid phone making noise and drawing attention all the time. my notifications all come in the form of a silent pulse and I can check them without being conspicuous at work. Plus the health features nearly saved my life this year.
Rating: 28 Votes

B.A.T
For running Apple Watch + AirPods has been magical for me.
Rating: 23 Votes

Aluminum213
And how many Apple watches end up in landfills after a couple years?
Rating: 22 Votes

Isn’t that comparing apples to oranges?

nope. I used to use a 10 grand watch. Haven’t worn it in over year since getting the series 4.
Rating: 22 Votes

Isn’t that comparing apples to oranges?

Jim Lahey
Apple Watch freed me from the shackles of checking a phone to a) tell the time, and b) check notifications. It is the precise polar opposite of what the non-wearers (who are often welded to their phone) think it is.

And that’s before we even get started on the utility. Controlling your home lighting & central heating system from anywhere in the world via your wrist is full-Star Trek. Likewise remote-starting your car in the winter so it‘s pre-heated when you get in it. On-wrist graphic & haptic prompts from Maps when navigating a city on foot. Etcetera etcetera etcetera.

Totally useless. Don’t know why I bought it...?
Rating: 18 Votes

LeeW
As someone who tried to adopt a smartwatch since the Sony smartwatch version 1 the only success came with Apple Watch, the simple reason is that it is useful not just for fitness, but a wide range of functions.

Much like the iPhone, Apple nailed the Watch.
Rating: 15 Votes