Sold between 2002 and 2004, the iMac G4 is long outdated, but MacRumors forum member Hughmac has given the arm-mounted computer a second life by cleverly transforming his into a desk lamp.

Hugh says he started by gutting the inside of the iMac's base, removing all components. Next, he removed the display and cut the back side of it into a flower shape, making sure to keep the Apple logo intact. Last, he connected a ceiling light to the top of the arm, ran wiring through the base, and added a power switch. 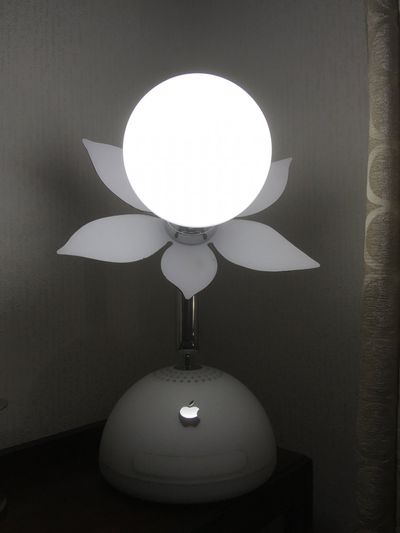 All in all, this is a brilliant do-it-yourself project that takes recycling to a whole new level. More photos can be found in the MacRumors forums.

Westside guy
So the computer that was inspired by the Pixar Lamp ('https://en.wikipedia.org/wiki/Luxo_Jr.') has been turned into a lamp itself!
Score: 6 Votes (Like | Disagree)

Keymaster
Apple does this kind of computer better than anyone...this, the G4 Cube, even the trash can Mac Pro all were unique in form when created and still functioned well. And, Apple actually produces and sells these, instead of the other computer manufacturers that just produce boring hardware iteration after iteration, with a little glitz sometimes but nothing like this.

Apple hasn't made a machine like this in a while now...the new Mac Pro comes close but it's a bit too industrial. I wonder how much of that is the influence of Ive...he has a very minimalist style now which is a bit limiting in the designs. Now that he's gone, they really need to make a crazy special edition to let the designers stretch their legs a bit and see what they can come up with for a new Apple design language for the next decade.
Score: 5 Votes (Like | Disagree)

code-m
Not my fancy, but creative.
Score: 3 Votes (Like | Disagree)

meson
Ah, the computer that lead me to buy my first Mac. I did an REU back in 2003 where my assigned work machine was a 15" G4 iMac. I fell in love with the machine. Before the next semester I made the pilgrimage to the Apple Store and picked up a first gen 12" G4 PowerBook. In addition to OS X, it was the little things that made the difference to me, like the pulsating power light that gave the machines a 'heartbeat' when asleep, the magnetically controlled screen latch on the PowerBook, the led battery indicator, the coin slot battery lock, the ability to control the Mac with an IR remote, the relative ease of swapping batteries, RAM, storage, and ease of installation for an AirPort card.

Those machines came from an era where Apple was still having fun with the little things in life. I think part of the reason that Apple gets so much grief over their designs these days is because they have abandoned those fun little quirks with each iteration, and haven't done enough to separate themselves after the rest of the industry started following Apple's design cues. I would love to see some of those old quirks come back, laptops with external battery indicators, heartbeats, iMacs with the option to raise, lower, tilt, and swivel the display. Bring back the fun!
Score: 3 Votes (Like | Disagree)
Read All Comments