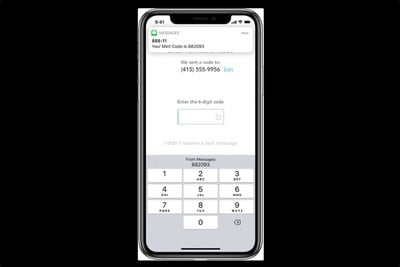 Two-step verification logins require a user's password and another element that only the user would know – in this case, a one-time code sent via text message – to gain access to an online account.

As it stands, these SMS messages can arrive in a variety of formats, making it difficult or impossible for apps and websites to detect them and automatically extract their information.

Apple's proposal has two goals. The first is to introduce a way that one-time passcode SMS messages can be associated with the website, by adding the login URL inside the message itself.

The second goal is to standardize the format of the SMS messages, so that browsers and other apps can identify the incoming message, recognize the URL, and then extract the OTP code for automatic insertion into the appropriate login field on the website.

The idea behind automating OTP entry is that it eliminates the risk of users falling for a scam and entering an OTP code on a phishing site with a different URL.

The first line is intended for the user, enabling them to determine the website that the SMS OTP code came from, while the second line is processed by browsers and apps so that they can automatically extract the OTP code and complete the 2FA login operation.

If auto-complete fails, users will be able to check the URL of the website that sent the text against the site they're trying to log in to.

According to the report, Google Chrome engineers are already on board with Apple's proposal, but Mozilla's Firefox team have yet to provide official feedback on the standard.

The new proposals would add another layer of security to Apple's existing security code autofill feature, introduced in iOS 12, that can detect one-time passcodes in Messages and display them conveniently above the user's keyboard.

fjfjfjfj
The way iOS captures the text code and fills it automatically is so convenient. It’s one of those little features that just makes things a bit easier and I smile every time it does it.
Score: 36 Votes (Like | Disagree)

adammusic
now work on auto deleting those messages after 10 minutes.
They pile up.
Score: 21 Votes (Like | Disagree)

Way to solve the problems of 10 years ago. Apple used to be more forward looking than this.

I could likely get my mother to use 2FA by sms but I’d never be able to convince her of carrying around an Authenticator device or using a keygen app. If we have the opportunity, shouldn’t we refine all options?
Score: 12 Votes (Like | Disagree)

oneMadRssn
2FA using SMS is better than nothing, but is not very secure because of how SMSs can be intercepted.

If Apple is pushing for standards, why not standardize a proper 2FA protocol (e.g., OATH) and require all smartphones to have a standard compatible authenticator app built-in?

Indeed, I bet Apple could do it by themselves if they just bundle a 2FA app into iOS using a common open protocol. It's hard to get users to downloading Authy or similar app, but if its built-in it will take off. Service providers will be incentivized to adopt that protocol so their 2FA can be native in iOS, and the Androids will copy Apple as they always do.
Score: 5 Votes (Like | Disagree)

lobbyist
It’s a very Apple like proposal - it just works.

The way iOS captures the text code and fills it automatically is so convenient. It’s one of those little features that just makes things a bit easier and I smile every time it does it.

baryon
Yes please! I hate it when making a payment, your bank sends the text but you can only copy the entire message as a whole so you have to remember it. And the code expires after a few seconds.

Actually, not being able to select and copy text from messages is extremely annoying, like when someone sends you someones phone number or email address but doesn't leave a space before and after it... The bane of my existence.
Score: 4 Votes (Like | Disagree)
Read All Comments

Friday May 7, 2021 1:51 am PDT by Tim Hardwick
An early look at an ongoing analysis of Apple's App Tracking Transparency suggests that the vast majority of iPhone users are leaving app tracking disabled since the feature went live on April 26 with the release of iOS 14.5. According to the latest data from analytics firm Flurry, just 4% of iPhone users in the U.S. have actively chosen to opt into app tracking after updating their device...
Read Full Article • 186 comments