Further cementing its status as Nintendo's most successful mobile game to date, Fire Emblem Heroes has led Nintendo's race to the billion-dollar revenue mark on mobile (via Sensor Tower). The game's $656 million in player spending, which includes players on both iOS and Android, has accounted for 61 percent of Nintendo's over $1 billion in mobile revenue. 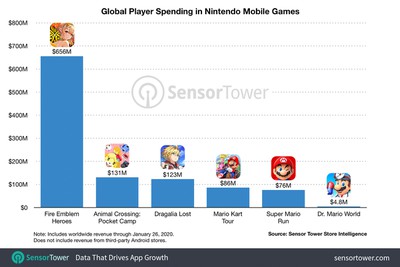 The next two highest-grossing Nintendo titles were Animal Crossing: Pocket Camp, which has accounted for 12 percent of all user spending among the company's mobile games, followed by Dragalia Lost at 11 percent.

Fire Emblem Heroes is a free-to-play game that lets players spend real money inside the app once they download it. Most of Nintendo's apps have followed this structure, except for Super Mario Run, which requires players to pay $9.99 to see the full game. Perhaps unsurprisingly, Super Mario Run, which remains Nintendo's most-downloaded title with 244 million downloads, contributed a smaller share of overall revenue at 7 percent.

While its 2016 earnings from Super Mario Run amounted to a modest $26 million, it was in February 2017, with the hugely successful launch of Fire Emblem Heroes, that Nintendo found its mobile footing. Despite being lower ranked in terms of downloads share, the financial success of Fire Emblem Heroes—which boasts average revenue-per-download of $41—suggests that Nintendo has hit upon a winning formula with the gacha model.

Nintendo's experimentation with other models of monetization, such as subscriptions in Mario Kart Tour and Animal Crossing: Pocket Camp, have fallen short of the financial successes of its other titles. However, Sensor Tower reports that, collectively, the publisher earned more than $350 million from its mobile offerings last year, and further experimentation with monetization models is likely to grow that total, along with new releases later in 2020.

69Mustang
Good ole IAP. Nintendo quickly figured out what mobile devs have long known. Generally speaking, if you ask us for $5 or $10 we'll accuse you of being greedy. Ask us for $0.99 about a thousand times? We'll happily hand over the wallet every time you ask.
Score: 3 Votes (Like | Disagree)

peglegjack
And the only money they've gotten from me is for Super Mario Run, which I absolutely loved. I did download Mario Kart Tour and played a few races, but after awhile it started to feel pretty gross and deleted it.

Wednesday July 8, 2020 9:35 am PDT by Joe Rossignol
Despite multiple reports indicating that Apple will not include EarPods or a wall charger with iPhone 12 models this year, one analyst believes that pricing will still increase slightly compared to the iPhone 11 lineup. In a research note provided to MacRumors, analyst Jeff Pu forecasted that iPhone 12 pricing will start at $749 for a new 5.4-inch model, an increase of $50 over the base...
Read Full Article • 278 comments

Thursday July 9, 2020 10:14 am PDT by Juli Clover
Apple today seeded the first public betas of upcoming iOS and iPadOS 14 updates to its public beta testing group, two weeks after first providing the updates to developers after the WWDC keynote and a day after seeding the second developer betas. Public beta testers who have signed up for Apple's beta testing program can download the iOS/‌iPadOS‌ 14 updates over the air after installing ...
Read Full Article • 160 comments

Wednesday July 8, 2020 1:49 am PDT by Tim Hardwick
A significant minority of iPhone users have taken to Apple's Support Communities and Reddit to report battery drain issues largely related to the Music app and high levels of background activity. Hundreds of users, many running iOS 13.5.1 on devices both new and old, are experiencing rapid battery drain when the Music app is not in use. In some cases, the background activity occurs over...
Read Full Article • 132 comments