Today marks the 10th anniversary of Steve Jobs unveiling the iPad at the Yerba Buena Center for the Arts in San Francisco. It was one of the last major products that he unveiled before his death in 2011.

Jobs argued that there was room for a new device category between the smartphone and the laptop, but only if that device was superior at some tasks. He then introduced the iPad as exactly that, referring to it as a "magical and revolutionary device" for browsing the web, reading and sending email, viewing photos, watching videos, listening to music, playing games, reading ebooks, and more. 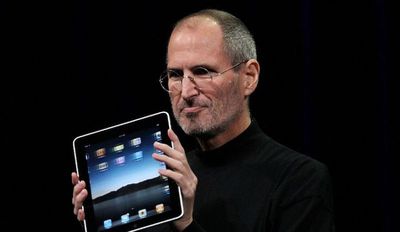 "iPad is our most advanced technology in a magical and revolutionary device at an unbelievable price," said Jobs. "iPad creates and defines an entirely new category of devices that will connect users with their apps and content in a much more intimate, intuitive and fun way than ever before."

The original iPad featured a 9.7-inch display, a single-core Apple A4 processor, up to 64GB of storage, 256MB of RAM, an advertised 10 hours of battery life, Bluetooth 2.1, a 30-pin dock connector, and a headphone jack. Wi-Fi-only models started at $499 in the United States, while models with both Wi-Fi and 3G cellular connectivity started at $629. Notably, the original iPad lacked cameras.


At only 0.5 inches thick and weighing just 1.5 pounds, Apple said the iPad was thinner and lighter than any laptop or netbook at the time.

Apple released the iPad on April 3, 2010 and, one day later, the company announced that it had already sold over 300,000 iPads. When unveiling the iPad 2 in March 2011, Jobs gave an update on this figure, revealing that Apple sold nearly 15 million iPads during its first nine months of availability.

Over the last decade, a new generation of the iPad has been released every year, with several new features and design changes along the way. We've recapped some of the bigger milestones in the device's history below:

Looking ahead, rumors suggest that Apple will refresh its iPad Pro lineup as early as March. A key new feature is expected to be a triple-lens rear camera system with advanced 3D sensing for augmented reality.

DinkThifferent
I remember that everybody made fun of the name, saw memes of attachable magnifying glasses for your iPhone to turn it into an iPad and the general feeling of “why would you buy this, this is just a large iPhone you can’t even call with”.

And as always, Apple proved us all wrong and i love my iPad for exactly the reasons Steve Jobs had told us we would love it for.

Even back then the apps were incredible! They have improved immensely since..
Score: 6 Votes (Like | Disagree)

japanime
I remember watching this keynote and feeling so sad at how frail Steve Jobs looked. But when he sat on that couch and demonstrated his latest brainchild, he seemed so content, calm, and full of life.

No doubt about it: Steve changed the world. ?
Score: 6 Votes (Like | Disagree)

Wiesenlooser
Maybe it is just me but the development for the iPad is not as fast as I would have liked it to be. They really dropped the ball on software progress somewhere around the iPad Air / iPad Air 2 time.

Glad to see that it is getting better since the iPad Pro era, but so far they have fallen short on the future of computing promise.
Score: 5 Votes (Like | Disagree)
Read All Comments