U.S. App Store customers spent $3.6 billion on the top 100 subscription apps of 2019, up 16 percent from the $3.1 billion spent in 2018, according to the latest report from Sensor Tower. The total spent on subscription apps was 24 percent of the $15.3 billion that the store generated from user spending overall last year.

Owing to its ad-free premium service, YouTube was the top subscription app on the U.S. ‌App Store‌, followed by dating app Tinder. During 2019, YouTube crossed the $1 billion milestone through in-app user spending alone. 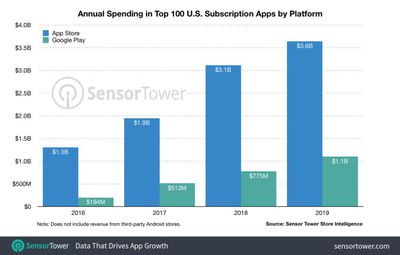 On Google Play in the U.S. in 2019, users spent more than $1.1 billion in the top 100 grossing subscription apps on the platform, up 42 percent year-over-year from the $775 million spent in 2018. However, the ‌App Store‌ still leads in consumer spending, with $3.6 billion versus Google Play's $1.1 billion, according to the report.

Across both the Apple ‌App Store‌ and Google Play, U.S. subscription app revenue reach over $4.6 billion in 2019, up 21 percent from the $3.8 billion generated by the top 100 subscription apps last year. The subscription revenue accrued by these apps is said to have accounted for 19 percent of the total $24 billion in U.S. consumer spend in 2019.

According to Sensor Tower, the top 10 subscription apps on iOS and Android devices grew by 10 percent in 2019, but the No. 11 to No. 100 apps grew by 35 percent in the same period of time, indicating that the subscription model is also helping the less popular apps earn more recurring revenue.

Despite their growth, subscription-based apps tend to divide the user community. Apple began incentivizing developers to sell their apps for a recurring fee instead of a one-time cost when it made changes to its ‌App Store‌ subscription policies in 2016. Usually, Apple takes 30 percent of app revenue, but developers who are able to maintain a subscription with a customer longer than a year see Apple's cut drop down to 15 percent.

An-apple-a-day
I will never, ever buy an iOS or Mac app on a subscription basis. No exceptions. Apps must be purchased at a fair, one-time price, or be free, or I won't use them. I expect to have a perpetual license to use my purchased version and get minor updates at no cost, and then I can choose to pay for major upgrades if I need the new feature set and/or compatibility those bring to the table. The app developers will continue to receive funding for ongoing support and development over time, to the extent their major updates remain relevant and compelling.

However, with iOS apps and Mac apps purchased from the App Store, that means developers must offer separate "upgrade" apps over time, which is inelegant and justifiably unpopular with many users. I believe that's still far better than a subscription model, though. With a subscription model, developers are paid for users' sustained app usage regardless of whether their app updates prove to be relevant and compelling. Then, of course, there's the basic issue of having to endure yet another recurring payment obligation... and another... and another....

For institutions using vertical market applications and/or needing comprehensive support options, I can see the subscription model being [possibly] appropriate. But for most individuals I don't think it makes sense at all.

On a similar note, I will never, ever rent my music on a subscription basis.

The subscription thing is one of my most hated Apple strategies ever. I'd much rather have the ability to purchase "app upgrades" for major new versions from the iOS and Mac App Stores (as opposed to having developers release entirely "new" apps to recoup their development and support costs). Free trials from the App Stores would be good too (but maybe that feature already exists?).
Score: 2 Votes (Like | Disagree)

terrapinjess
So, people are spending more money on subscriptions? Yeah isn’t that because ...... everything is a subscription now? ?‍♂️
Score: 2 Votes (Like | Disagree)

Youtube Premium ftw. Best $15 sub by far imo. I can see why it's the top sub on the App Store.


Agreed, I may never watch YouTube without it again. Although, I’d rather pay $5 for Premium if I could drop the music portion. I know they are hoping it keeps me in their music service, but I suspect if I have to cancel one I’d keep Apple Music and stop using YouTube.
Score: 2 Votes (Like | Disagree)

Juicy Box
I have noticed a lot of apps that used to have an upfront one-time price now going to the subscription model.

I see the appeal for developers, but in most cases, I don't see any benefit for the consumer, except maybe longer app support.
Score: 1 Votes (Like | Disagree)
Read All Comments