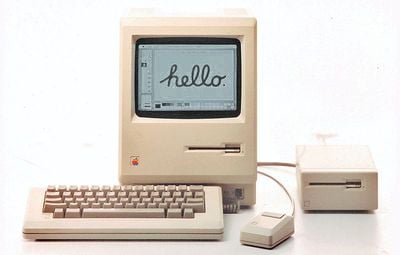 The now iconic machine weighed in at a whopping 17 pounds and was advertised as offering a word processing program, a graphics package, and a mouse. At the time it was introduced, the Macintosh was seen as Apple's last chance to overcome IBM's domination of the personal computer market and remain a major player in the personal computer industry.

A Computerland newspaper ad from the day the Macintosh was introduced
Jobs pulled the Macintosh out of a bag at the event, powered it on, and the Mac had a little message for everyone in attendance.

Hello, I'm Macintosh. It sure is great to get out of that bag.

Unaccustomed as I am to public speaking, I'd like to share with you a maxim I thought of the first time I met an IBM mainframe: NEVER TRUST A COMPUTER YOU CAN'T LIFT!

Obviously, I can talk, but right now I'd like to sit back and listen. So, it is with considerable pride that I introduce a man who's been like a father to me... STEVE JOBS.

Despite the high price at the time, which was equivalent to around $6,000 today, the Macintosh sold well, with Apple hitting 70,000 units sold by May 1984. The now iconic "1984" Super Bowl ad that Apple invested in and debuted days before the Macintosh was unveiled may have helped bolster sales.


After the Macintosh, Apple introduced the Macintosh II, the Macintosh Classic, the PowerBook, the Power Macintosh, the iMac G3, the iBook, and so on, eventually leading to the current Mac lineup, which includes the MacBook Air, MacBook Pro, ‌iMac‌, ‌iMac‌ Pro, Mac mini, and Mac Pro.

Today, Apple is one of the leading PC vendors in the world, shipping an estimated 18 million Macs worldwide in 2019. Then Apple competitor IBM is no longer in the personal computer business, having sold its technology to Lenovo back in the early 2000s.

Apple in the future is expected to continue expanding its popular Mac lineup, and current rumors suggest we can expect to see new 16-inch MacBook Pro models, a refreshed 13-inch machine with scissor keyboard, and, eventually, an ARM-based Mac.

Blackstick
My mom was 6 months pregnant with me and insisted my dad save money for baby’s upcoming needs and such. My dad of course didn’t listen to rational advice, thus I grew up with this Mac around and there are photos of toddler-me playing with its keyboard typing gibberish in MacWrite. Wish my dad had held onto it, he sold it in the late 80s for a newer model... in 2007 he also bought the first iPhone for both of us while I was a broke, recent college grad, he wanted us both to experience great new technology that so rarely happens. He passed suddenly in 2018 but I’ve got his 5k iMac and it has special meaning to me.

I think the Apple logo burned into my brain at a young age because I was a Mac Genius for 7 years and then went into corporate IT as an Apple support engineer before entering leadership. I have my dad’s bad saving habits and carelessness with money to partially thank for my career path and early interest in technology.
Score: 75 Votes (Like | Disagree)

While I do not believe it is likely, I really wish Apple will switch Mac to their own ARM Chip. Intel is still the largest component cost in nearly all Mac. And it is now clear PC aren't going anywhere. I just wish Mac would gain more footing in terms of PC market share. Instead of focusing Mac as Professional only.

I don’t understand why people want the Mac to become a Facebook ARM machine. Just use your iPhone for that...
The only reason why researchers and scientists use Macs is because of the x86 and Unix based OS, and let’s hope Tim keeps it that way!
Score: 24 Votes (Like | Disagree)

PickUrPoison
MacWrite and MacPaint, on floppy. That was it. Even though I was rather familiar with Apple as I had a job programming on an Apple II+, the first time I used a Mac I was blown away. (I’d heard about the Lisa but never saw or used one.) Mouse, pull-down menus, resizable windows, scroll bars, proportionally-spaced fonts; yeah it was kind of expensive, but a true game changer.

15 years later I would meet Doug Engelbart, inventor of the mouse. I was working at Logitech at the time, lead (and only lol) QA on the mouse driver for this weird-looking new computer called iMac. Mr. Engelbart had an office in the building—the title below his name on the door said Inventor Emeritus iirc—but he was rarely there, to my frustration.

I used to cruise by there a few times a week, and one day I was lucky and there he was. I grabbed the opportunity... nicest guy you’d ever want to meet; extremely humble and most unassuming. Career highlight to be sure.

I still like Macs, but I’m sometimes stuck using a Windows PC at work. Oh well at least it’s mostly usable, or at least more friendly than DOS; no editing autoexec.bat or config.sys files anymore ?
Score: 23 Votes (Like | Disagree)

otternonsense
Good times. It kinda also feels like 36 years since the iMac has been updated inside out.

Meanwhile, the 1984 ad has indeed come to life in the Infinite Loop cafeteria with Tim on screen.
Score: 19 Votes (Like | Disagree)

The severely neglected iMac is begging for a modernised refresh. A consumer focused modular Mac wouldn't go amiss either.

BF1M
Makes you wonder how many are still in use. We still use an Apple IIe at work....
Score: 13 Votes (Like | Disagree)
Read All Comments