EA is ending support for its Tetris for iOS apps starting on April 21, 2020, the company announced today in app updates to Tetris Premium, Tetris 2011, and Tetris Blitz. 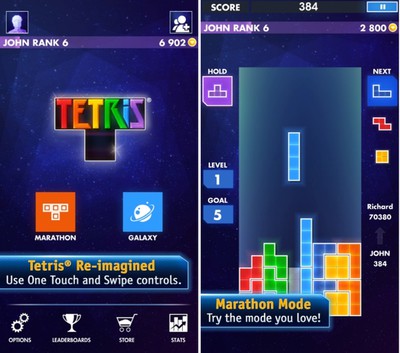 As noted on the MacRumors forums, updates to the Tetris apps say that the games are being retired, with no word on why. From the app updates:

Hello Fans, We have had an amazing journey with you so far but sadly, it is time to say goodbye. As of April 21, 2020, EA's Tetris(R) app will be retired, and will no longer be available to play. Kindly note that you will still be able to enjoy the game and use any existing in-game items until April 21, 2020. We hope you have gotten many hours of enjoyment out of this game and we appreciate your ongoing support. Thank you!

Customers who have purchased in-app items in one of EA's Tetris apps will need to use those items up before the game is retired on April 21, 2020. Though some apps remain available to play after being pulled from the App Store, it sounds like EA is removing access to the Tetris games entirely.

Tetris has been a staple iOS game since the iPhone launched, offering up well-known and well-loved block stacking puzzle gameplay. EA has offered several updates for its Tetris apps over the years, but prior to today's announcement about retirement, the apps had not seen an update since the summer of 2018.

GubbyMan
So much ********. Why do they have to completely delete the games when they don't need an internet connection to play them. Tetris Premium actually costs money and I think I bought it 8 years ago on my iPhone 3GS. Now they are telling me I can't play it?
Score: 31 Votes (Like | Disagree)

480951
People had to pay for this app so they should be getting refunds. Why did Tetris need an always online connection anyway? That’s the kind of game you’d want to play when you’re not connected to the internet. They should just be disabling needing to be online so people can still use the app, this is poor form.
Score: 26 Votes (Like | Disagree)

zorinlynx
Hello folks! I'm the one who originally posted about EA killing Tetris in the Software forum.

It seems that this post on Reddit explains the situation better; EA had a 15 year license to distribute Tetris games on mobile and that license expires... You guessed it, April 2020.

I'm still irritated that they may kill off existing installs, though. The least they can do is just remove the online components of the game and leave the app playable for those who already have it.

KentuckyApple
Only thing I can think of is that they sold the property to someone else. They will end of life it, and then the new owner is going to make everyone buy it again.
Score: 21 Votes (Like | Disagree)

Gyroworld
But why?
Score: 16 Votes (Like | Disagree)
Read All Comments