Apple today shared release dates for several of its upcoming Apple TV+ shows that are set to launch during the spring and summer of 2020, and offered first looks at some of the content.

"Amazing Stories," a sci-fi anthology series executive produced by Steven Spielberg, is set to premiere on Friday, March 6. "Amazing Stories," which is a reimagining of the original 1980s series, was one of the first shows that Apple picked up for ‌Apple TV+‌. 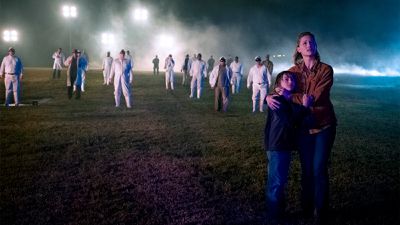 The show will focus on a new topic each episode, similar to "Black Mirror" and "Twilight Zone." Apple says that each episode of the series will "transport the audience to worlds of wonder through the lens of today's most imaginative filmmakers, directors and writers."

"Defending Jacob," a series starring Chris Evans and Michelle Dockery, will debut on Friday, April 24. The show is a drama series that unfolds around a shocking crime in a small Massachusetts town, following a district attorney who is torn between his love for his son and his duty to uphold justice.

"Home Before Dark," a series that focuses on the story of child journalist Hilde Lysiak, is set to premiere on Friday, April 3. The show follows a young girl who moves from Brooklyn to a small lakeside town where her father is from. Her pursuit of the truth leads her to unearth a cold case that everyone in town tried to bury. The show stars Brooklynn Prince, Jim Sturgess, Abby Miller, Kylie Rogers, Adrian Hough, and more.

Documentary series "Home," which focuses on "the world's most innovative homes," will premiere on Friday, April 17. Apple says that each episode "unveils the boundary-pushing imagination of the visionaries who dared to dream and build them."

Apple also announced a new series from the UK, "Trying," which will launch on Friday, May 1. The show is described as a look at "growing up, settling down, and finding someone to love." It will feature Rafe Spall and Esther Smith as Jason and Nikki, a couple who want a baby but can't have one.

Apple today also announced the renewal of "Mythic Quest: Raven's Banquet" for season 2 ahead of its upcoming debut on Friday, February 7.

All of the shows listed above will be available on ‌Apple TV+‌, which is priced at $4.99 per month or free for a year for those who recently purchased an iPhone, iPad, Mac, iPod touch, or Apple TV.

Justanotherfanboy
I didn’t know Amazing Stories was slated to have multiple writer/director teams!
That sounds amazing... as a sci-fi lover, I’m VERY excited about this series.

I'm even ok w/ Apple wanting it more family friendly, than just a mere black mirror knock-off.
That horrific dystopic future style is great and all... but in this case- the Spielberg original was more of an “after school” type program. I’m glad they didn’t make it all grimdark, just because that’s what plays right now.

I have high hopes for this show & hope there ends up being some great pairings in the creative teams!
Score: 11 Votes (Like | Disagree)

If they've decided that PG13 is their limit

They haven’t, though. Their marquee programming has all been rated TV-MA except Dickinson.
Score: 10 Votes (Like | Disagree)

They haven’t, though. Their marquee programming has all been rated TV-MA except Dickinson.

Yeah, I don’t understand how everyone got this misconception. Those early rumors were so obviously fake.
Score: 8 Votes (Like | Disagree)

Jakexb
That's what people misunderstand. Apple TV doesn't have to be everything for everybody. It's a win for them if they make any shows that make people feel like they're missing out if they don't have an Apple media product. It doesn't need to be your one and only streaming service. It doesn't need to serve every audience and every taste.

If they've decided that PG13 is their limit, then that's their brand choice. And that's fine. There's no reason Apple needs be your source of edgy content. If they make anything that elevates AppleTV beyond a simply dumb box for other services content, then they've been a success. Then you can still get your despair-filled sci-fi from netflix.
Score: 6 Votes (Like | Disagree)

If they've decided that PG13 is their limit, then that's their brand choice.

Except they have not made that decision. The Morning Show is not PG13, nor are some of their other shows.
Score: 6 Votes (Like | Disagree)
Read All Comments