Rather than feet or wheels, the rack mount version of the ‌Mac Pro‌ uses stainless steel slide rails that allow it to be slotted into a rack. The machine features the same 3D lattice design for maximizing airflow and top handles for accessing the internals. 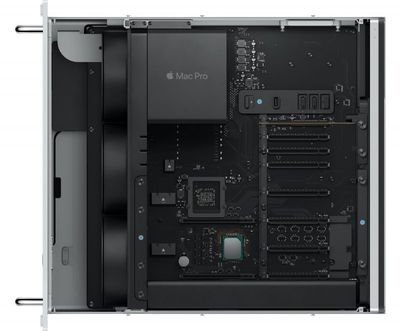 The base model of the rack mount ‌Mac Pro‌ is the same as the base model standard ‌Mac Pro‌ featuring a 3.5GHz 8-core Intel Xeon W processor, 32GB RAM, and 256GB of storage.

Agent OrangeZ
I need this to make my web browsing and email a smoother experience.
Score: 39 Votes (Like | Disagree)

No reason for the rack mounted version to have a GPU in it by default. Could remove it and cut the price a little, though even without cutting the price, having the internal space cleared out of the factory might even be nice to some costumers.

The GPU is a super-powerful processing unit tapped in for more than video output. It can be used for advanced numeric calculations, server-side rendering farms, etc.

And then there is what happened to OS X Server. Why not offer an Apple distro of linux?

Let's clear up some confusion.

macOS is a true UNIX operating system (of which Linux was derived). OS X Server was just a set of tools for managing "server apps". Those server apps can be installed on any Mac running macOS. There was nothing that OS X Server enabled to make it a server. Every Mac can be a server.

I do my full-stack web development on my 6-year old MacBook Air, and it runs *exactly* the same software as my 20+ Ubuntu Linux servers set up at 6 different hosting providers around the world.

The true power of a Mac is not in the user interface, but at the command line, same as Linux. A whole world of software is available for installation easily via package managers, just like in the Linux world. Homebrew (brew.sh) and MacPorts (www.macports.org ('http://www.macports.org')) are the two most popular sources of such software.
Score: 17 Votes (Like | Disagree)

Digital Skunk
Hmmm. Tasty. I kinda prefer the rack mount version. I could save a lot of space on my desk and keep a lot of gear cool with a mini rack.
Score: 7 Votes (Like | Disagree)

Forgive me please, but I’m struggling to see why Apple are charging a thousand dollars extra for a different case? Can anyone enlighten me as to the reason?

You mean $500 more? I would guess because they expect to sell fewer machines in this configuration, so recovering the design cost will cover part of the price difference and the inclusion of rails, covers the rest.
Score: 6 Votes (Like | Disagree)

And then there is what happened to OS X Server. Why not offer an Apple distro of linux?

Because no one would pay for a Mac to run Linux. The benefit of these machines is the ecosystem. If one is not interested in that, then these are not the right machines.
Score: 6 Votes (Like | Disagree)
Read All Comments

Friday May 20, 2022 8:07 am PDT by Joe Rossignol
Apple now plans to release a new 27-inch display with mini-LED backlighting in October due to the Shanghai lockdown, which has resulted in production of the display being delayed, according to display industry consultant Ross Young. In a tweet, Young said Apple is in the process of moving production of the display from Quanta Computer to a different supplier and/or location, resulting in a...
Read Full Article • 152 comments