Friday January 10, 2020 10:02 am PST by Juli Clover
Apple's online store and select Apple retail stores are now selling Scosche's BaseLynx Modular Charging System, which features different device charging components that can be paired together to form a charging base. 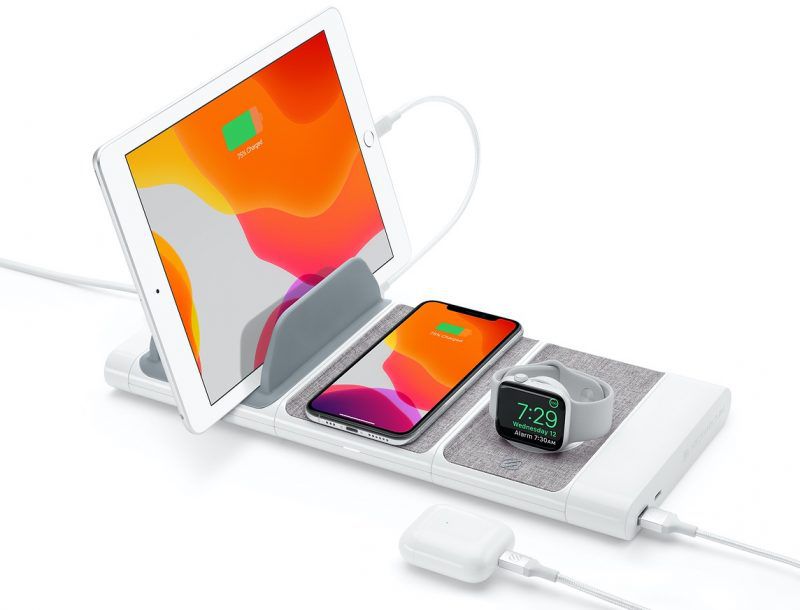 The standard kit includes the ‌Apple Watch‌ module, Qi module, and the vertical charging stand, while the Pro version includes those three modules along with the EndCap charger. 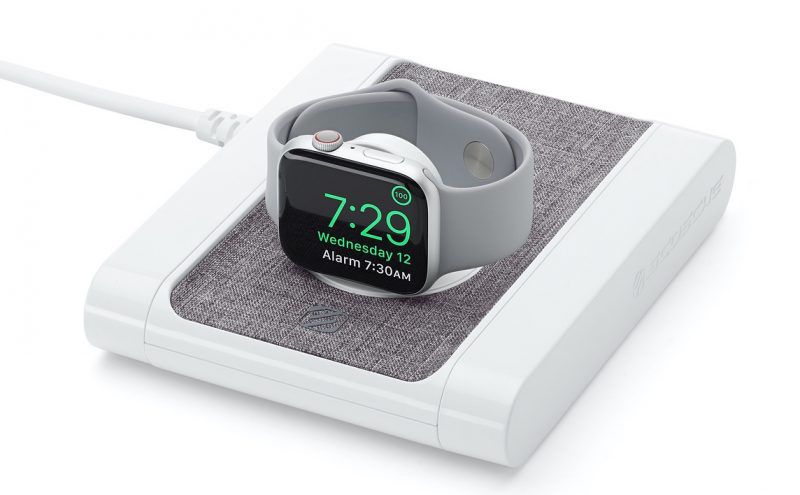 Each portion of the BaseLynx can also be purchased separately at prices ranging from $39.95 to $69.95, so customers can build a setup piece by piece.

There are only four charging modules at this time, but Scosche plans to build additional modules in the future that will integrate with the existing modules.

Think about this for a second, Why would anybody need to use the phone on a wireless charger when its....charging? I think we gather that concept, but it’s purpose is to have the convenience without using a lightning cable directly into the port.

Keep thinking. Using an iPhone while it’s charging is extremely common. Using it while charging wirelessly is possible if the charger orients the phone vertically, which some do. But using it while it’s charging with a cord is obviously much more convenient as you can hold the phone in your hand where it belongs...which you can’t do with a wireless charger. And that’s why I avoid them. There’s nothing “convenient” about a feature that makes an iPhone unusable and takes longer to charge with. And there’s nothing “wireless” about a charger that has to plug into an AC outlet.
Rating: 5 Votes

ChromeAce
Pointless. You are gonna have all those cords around anyway for iPad charging, you might as well hook up a couple more to the iPhone and AirPods for faster performance. Also, you can’t use an iPhone while it’s charging wirelesssly laying flat. So I just run all the cables behind the nightstand and use a cable organizer and ’s charging stand for the watch.
Rating: 5 Votes

I’ve been looking for something like this for a while now. There are all kinds of multi-charging devices on Amazon but I have yet to find one that charges the iPhone, iPad Pro and Apple Watch all at once - without the damned thing tipping over (yes I foolishly bought one).

try looking up the Belkin Boost. Charges my watch, phone and iPad at once. Usb A on the ack of it. Works awesome.

Costco also has a ubio labs product that charges phone, watch, and also has 2 usba ports that my wife charges her iPad and AirPods at once now. It was just on sale for $70. https://www.costco.com/ubio-labs-wireless-charging-stand-for-iphone-and-apple-watch.product.100487101.html

something that naysayers about these products forget is that there are only a finite amount of plugs in some rooms and charging my three devices and my wifes three devices plus two airpod cases can quickly become a PITA To juggle plugs without unsafe extenders or extension cords - which look horrible. And you’re always trying to keep the different power bricks plugged into the right devices...
Rating: 4 Votes

Keep thinking. Using an iPhone while it’s charging is extremely common. Using it while charging wirelessly is possible if the charger orients the phone vertically, which some do. But using it while it’s charging with a cord is obviously much more convenient as you can hold the phone in your hand where it belongs...which you can’t do with a wireless charger. And that’s why I avoid them. There’s nothing “convenient” about a feature that makes an iPhone unusable and takes longer to charge with.

You haven't internalized yet how one uses 'put-down' charging. Put-down charging works like charging an electric toothbrush. Any second the phone is not in your hand (and you are within reach of a Qi charger), the phone is sitting on said charger and is getting topped up. Like with an electric toothbrush, the default state of a phone used with enough Qi chargers is fully charged. There is no need to pencil in time to charge the phone, because most of the time the phone moves from one Qi charger to next (on your nightstand, on your coffee table, on your desk, in your car). Unless you really use your phone for hours without interruption, there will be enough time during those interruptions to keep the phone not too far from fully charged.

And there’s nothing “wireless” about a charger that has to plug into an AC outlet.


When dissing Qi charging, at least do it in a way that makes logical sense. Or is there also nothing "wireless" about a WiFi router that has to be plugged into the cable modem? Qi charging is 'wireless' but not 'contactless'.
[automerge]1578686518[/automerge]


I know someone that bent their iPad Pro when it was not fully supported while charging. Anyone with a 12.9 iPad Pro, I recommend you lay it down flat next to this charger rather than risk having it standing up.


You're missing the point. $200 IS a lot of money for something that only improves the look of what already exists. Spending money for looks...even if you have the money...is not really minimalistic. Plus, this particular item is pretty freakin' big.


You are looking at this the wrong way. How do you get people to spend $200 on chargers? Only via looks, there is no technical innovation that isn't already available at low cost.
Rating: 3 Votes

I've been keeping an eye on this for some time now. I definitely see myself owning the BaseLynx in the future.
Rating: 2 Votes

That’s weird. Not only did I read this article but I also replied to both these posts with my iPhone laying flat on a wireless charger.

You’re definitely limited when it’s on a Qi charger but it isn’t impossible to use your phone when it’s charging.

Ugh... I knew this response was coming.

You're right. It is possible to use the phone flat on a wireless pad if it's within arms reach and you're above it. My bad for not exploring every possible scenario.

However, the phone stops charging as soon as you pick up the phone to use the phone handheld... whereas the phone will continue to charge if it's connected to a cable.

I would prefer to pick up my phone and use it handheld rather than on a tabletop... but that's just me.

Keep in mind that when you’re plugged in, your also limited to range and how you can handle your phone.

True. That's why I have at 6 foot cables.

I've never felt "limited" by using a phone with a charging cable attached.

And please don't reply with "well what if you want to walk across the room? You'll be dragging a cable behind you!"

I'm gonna go ahead and stop you there... I got it.

Your smartphone is designed to work off battery, not a charging cable.

The phone is designed to work however I damn well please.... :p


Anyway... there are pros and cons to wired and wireless charging. Luckily we have both options available to us right now. Pick your poison.

But I'm really not looking forward to the day when Apple removes the charging port! :(
Rating: 2 Votes

devices in the household that get organized in a particular spot each night and to keep the area neat and tidy.


we can’t judge what is overspending for other people.


Since Apple’s been around for awhile, a lot of the folks here may have progressed in life to the point that they’re on a fixed income. That can sometimes alter a person’s take on value significantly.
Rating: 2 Votes

mannyvel
This is pretty slick. It makes me want a Qi-compatible iPhone. Bummer that the vertical charger doesn't come with cables, because those are going to look really ugly. There's just no way to make a multi-device charging station w/cables look good.
Rating: 2 Votes

bviktor
Oh damn. Finally a charger that makes sense. But that price oof. I'd need an iPhone charger, a Watch charger, plus the USB-C end plug, that's $160 before taxes... Especially the Watch charger is pretty darn ridiculous, that's $70... the charger itself is just $30, meaning you pay $40 for a piece of plastic.
Rating: 2 Votes

Unregistered 4U
Sigh... rassin’ frassin’ USB-A.....the GOOD thing is that, because this is modular, hopefully they’ll come out with ALL USB-C modules eventually. I don’t have USB-A anything anymore, so I’m waiting for the industry to catch up. I’d even be willing to pay a premium now for the option! :)
Rating: 2 Votes