Lenovo last year unveiled a new foldable ThinkPad prototype, marking the first foldable PC design that we'd seen. Lenovo has continued to work on that prototype, and is now ready to bring it to market.

At CES, Lenovo is showing off the new ThinkPad X1 Fold, a laptop PC with a 13.3-inch folding LED display with a 4x3 ratio. 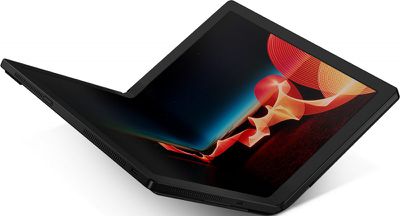 According to Lenovo, the ThinkPad X1 Fold is made from a combination of lightweight alloys and carbon fiber, and it's protected by a leather folio cover. It weighs in at less than two pounds and is designed to "seamlessly morph through multiple orientations," transforming from a device with a small footprint to a device with a fully flat display.

The ThinkPad X1 Fold is equipped with Intel Core Processors with Intel Hybrid Technology, and it will run Windows 10 when it launches, though Windows 10X support will be added at a later date for an "enhanced foldable user experience."

Lenovo believes the X1 Fold will bridge the gap between the smartphone, the tablet, and the laptop, offering benefits for users who often switch between devices with multiple form factors.

When used in landscape mode with the integrated kickstand included in the folio case, users can take advantage of a Bluetooth Mini Fold Keyboard for typing purposes. When folded closed, the keyboard is stored, secured with magnets, and wirelessly charged.

In this laptop orientation, users can choose to leverage two independent displays at one time for multitasking purposes, and it can be connected to a full-size keyboard and mouse or second display using USB-C when at a desk.

While designing the X1 Fold, Lenovo went through six different hinge designs and over 20 variations, settling on a multi-link torque hinge that manages stresses during folding. Combined with a carbon fiber reinforced frame plate, the hinge optimizes the viewing experience when the tablet is folded flat.

macduke
My laptops have folded since the 90s.
Score: 30 Votes (Like | Disagree)

alexandr
maybe it's just me, but the cost at which this foldable technology comes at is way to high for the questionable benefits that you're getting...
Score: 21 Votes (Like | Disagree)

We don't know where folding tech will be in five years, but Apple needs to jump on the bandwagon

Remember when the super thin (for that time) MacBook Air came out? Wasn't the starting price somewhere between 4000 and 5000? And this Lenovo is using even more innovative displays .... so I actually think its cheaper then expected. New tech always feels overpriced, but its a way to recoup the R&D cost of new stuff. The price will go down over time. First generations are never meant for the everyday user, its for early adopters that are willing to pay the premium, everyone else will benefit down the road when the price becomes 'normal'

Not many people are asking for this and this isn't one of those "They don't know what they want" items either...
Score: 7 Votes (Like | Disagree)

ok thats cool.. other than it can fold, what does this solve?

It solves the problem of how to put a big screen device into a small bag.

I must admit I am always a bit baffled at these "what-is-it-good-for"-posts that inevitably appear under every announcement of a device with a folding screen. Isn't it very, very obvious how useful this would be for portability?

(And I'm not saying that this particular Lenovo will actually be the one that really solves the problem - maybe its technology is still too flawed, and maybe it just isn't possible to make a good folding screen. But I can certainly see why the manufacturers keep trying.)
Score: 7 Votes (Like | Disagree)
Read All Comments