Apple has removed messaging app "ToTok" from the App Store after an investigation by the New York Times concluded that the app was actually a spying tool being used by the United Arab Emirates government to mass surveil its citizens. 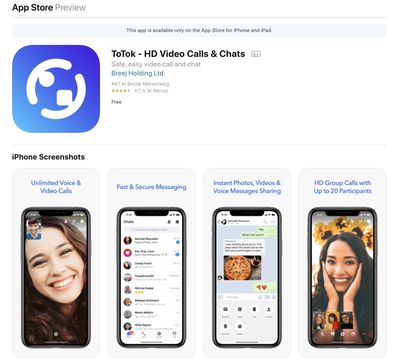 According to the report, which cites U.S. officials familiar with a classified intelligence assessment, the app was being used to mine data from users' contact lists and track locations by offering a localized weather forecast.

ToTok's privacy policy notes that it "may share your personal data with group companies," but it turns out that the app is linked to Abu Dhabi-based cybersecurity firm DarkMatter, which is under investigation by the FBI for possible cybercrimes. A U.S. intelligence assessment also linked ToTok to Pax AI, an Abu Dhabi-based data mining firm.

In the time that it was available on the ‌App Store‌ and the Google Play store, the app was downloaded by millions of users in the Middle East, North America, Europe, Asia and Africa. The app was particularly popular in the UAE, where other messaging apps like WhatsApp and Skype are partially blocked. Users who installed the app on their devices are being advised to remove it, as any surveillance capacity could still potentially operate unhindered.

The UAE has reportedly been using surveillance technology to crack down on internal dissent in the country, including hacking Western journalists and holding human rights activists in solitary confinement over Facebook posts.

It's not the first time we've heard reports that apparently legitimate apps are being used as fronts for governments to spy on their citizens. An October report from the Open Technology Fund (OTF), an initiative funded by the U.S. government, revealed that an "educational" app teaching the Chinese Communist Party's policies includes code that amounts to a backdoor into users' Android devices.

A separate report elaborating on the findings said that the app, known as "Study Xi, Strong Nation," essentially gives the Chinese government the capacity to determine "the location of every citizen at any single point in time."

DoctorTech
This is one of the reasons I mainly stick to Apple’s native apps for the majority of my needs. I do use some 3rd party apps for special purposes (business, cycling and special interests) but I regularly review and limit what apps have access to various phone features such as location, contacts, and cameras & microphone.
Score: 16 Votes (Like | Disagree)

WeChat persists. Nothing more needs to be said.
Score: 12 Votes (Like | Disagree)

meaning-matters
This app that lets Saudi Arabian men track their wives is still there: https://apps.apple.com/us/app/أبشر/id1004966456

This app that lets Saudi Arabian men track their wives is still there: https://apps.apple.com/us/app/أبشر/id1004966456

Gotta love the glowing reviews there …

What is an amazing App!

I write this review for those who know nothing about one of our most efficient eGov platforms that has been called “Absher”, which means “at your service”. Simply this app makes our life very convenient; it saves us time, effort, money and much more than that. No body outside Saudi Arabia could imaging where were we before Absher! Since it was launched 11 years ago, Absher has been greatly contributing to the quality of our lives. Yes, it improved it big time. Moreover, it has supported and enhanced both security and efficiency of other eGov services. I know that many countries on the G20 list are still far away from reaching what Absher has brought to us. There are more than 25 eService on Absher that any good citizen of a country would be thrilled and delighted to have access to within his/er country. We are grateful and thankful to the great men and women behind Absher platform. My parent’s generation, my generation and next generations can’t/won’t thank you enough for your outstanding achievements. All the best!

The exact same glowing review was posted twice by different users. What a coincidence …
Score: 8 Votes (Like | Disagree)
Read All Comments