The New York Times today claimed that it has obtained a file with the precise location of over 12 million smartphones over a period of several months in 2016 and 2017. While this data is technically anonymized, the report details how easy it is to associate specific data points with specific individuals. 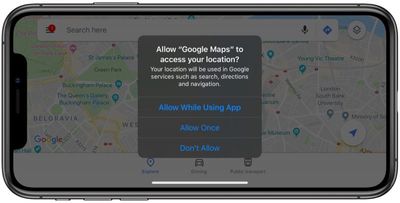 With the help of publicly available information, like home addresses, The New York Times said it easily identified and then tracked military officials, law enforcement officers, lawyers, tech employees, and others:

In one case, we observed a change in the regular movements of a Microsoft engineer. He made a visit one Tuesday afternoon to the main Seattle campus of a Microsoft competitor, Amazon. The following month, he started a new job at Amazon. It took minutes to identify him as Ben Broili, a manager now for Amazon Prime Air, a drone delivery service.

The report explains that location data is collected from third-party smartphone apps that have integrated SDKs from location data companies like Gimbal, NinthDecimal, Reveal Mobile, Skyhook, PlaceIQ, and others, adding that it is currently legal to collect and sell all this information in the United States.

Apple continues to take steps to protect the privacy of its users. In iOS 13, for example, there is no more "always allow" option when third-party apps request to access your location. If a user wants to grant an app continuous access to location data, they must do so in Settings > Privacy > Location Services.

Apple also requires that apps provide users with a detailed explanation as to how location data is being used when prompted.

iPhone users who are concerned about their privacy can better protect themselves by navigating to Settings > Privacy > Location Services and disabling access to location data for unessential apps, or choosing the "while using the app" option at a minimum. We also recommend reviewing the privacy policies of apps.

A spokesperson said Apple had no comment on The New York Times report when contacted by MacRumors.

itsmilo
As long as all these spying SDKs are allowed by Apple, they can suck it with their „we value your privacy“ PR talk
Score: 10 Votes (Like | Disagree)

Toratek
The irony is that there are multiple trackers right here on MacRumors that do the exact same thing... I have at least six of them blocked at this very moment.

If you aren't using something like PrivacyPro and a VPN at all times, and multiple layers of device masking, plenty of people can figure out where you are at any given time.

Except Apple...which encrypts the information in both directions, and who can't look at your data.
Score: 9 Votes (Like | Disagree)

MadDawg2020
Problem 1. You chose to download an app from Google -or- an app that uses Google services.
Problem 2. You willingly gave Google your personal information.
Problem 3. You willingly agreed to Google TOS and allowed Google full access to all of your device data.

V_Man
Ok. Whatever. Everyone is tracked nowadays. Big surprise. Apple tracks our location too. To believe otherwise is naive
Score: 7 Votes (Like | Disagree)

justperry
Tracking individuals should be forbidden, actually, all data collected by any company should be anonymised.
Better yet*, don't collect any data on individuals.

Doctor Q
Does "while using the app" include when the app is in the background? Most people don't close their apps.
Score: 6 Votes (Like | Disagree)
Read All Comments

Sunday October 2, 2022 6:41 am PDT by Joe Rossignol
Apple is developing new iPad Pro, Mac, and Apple TV models, and at least some of these products will be released in October, according to Bloomberg's Mark Gurman. However, Gurman continues to believe that Apple is unlikely to hold an event this month. In the latest edition of his Power On newsletter, Gurman said "the big iPhone 14 unveiling last month was probably it for Apple in 2022 in...
Read Full Article • 151 comments