Best Buy and Amazon are offering big discounts across Apple's range of iPads, providing last-minute holiday shoppers with a chance to save on an iPad before Christmas. Models discounted include the 10.2-inch iPad, iPad Air, and 11-inch iPad Pro. 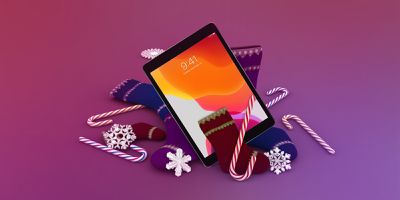 Each configuration below represents a sale at Best Buy, and where it's appropriate we've also provided matching sales happening on Amazon. Both Amazon and Best Buy are offering a form of expedited shipping, be it free two-day or next-day delivery, but delays can happen and stock is low for some models, so be sure to shop soon.

Dear MacRumors staff, please stop saying "Lowest Ever" when the price is just a seasonal thing and routinely gets discounted by the same amount.

Not to mention that I've actually seen some of these models for a bit less at times over the past month at places like Micro Center, Walmart and Target.
Score: 1 Votes (Like | Disagree)

code-m
Have to agree with the other two posters, the “lowest ever price” tag is misleading and some may consider it click bait considering MR received affiliate revenue from it.

I have also seen prices lower elsewhere weeks and months prior. Constantly claiming it is the lowest ever price is starting to bother some MR members and I can see why. I don’t mind and understand the advertisement but making it seem like a news article and with the same tag line is embarrassing at this point. Maybe have a separate tab or include it in the buyer guide as it populated the main feed on safari mobile.
Score: 1 Votes (Like | Disagree)

tharitm
Dear MacRumors staff, please stop saying "Lowest Ever" when the price is just a seasonal thing and routinely gets discounted by the same amount.
Score: 1 Votes (Like | Disagree)
Read All Comments