Geekbench 5 benchmarks of some of the new Mac Pro processor options are now available, giving us an idea of how the Mac Pro performs relative to other Apple machines.

Based on the available scores, the 8-core, 12-core, and 16-core Mac Pro processors offer performance similar to the processors in the 2017 iMac Pro models. 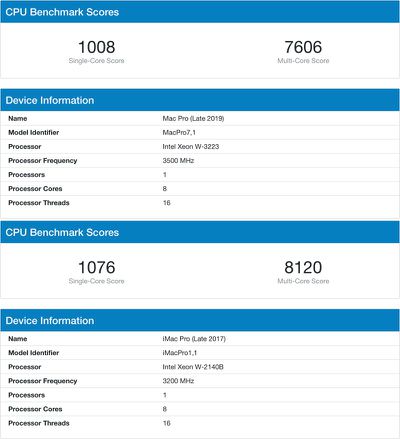 In multi-core performance, it's only the iMac Pro models and the high-end iMac that outshine the 8-core Mac Pro, while 12-core and 16-core models are close to the top of the chart.

Geekbench 5 multi-core Mac scores
Though the base and middle tier models offer performance that's fairly similar to the performance you get from many of the 2017 iMac Pro models, the upgradeability and expandability of the Mac Pro should not be overlooked.

Every component is modular and can be improved and upgraded after purchase, with RAM upgrades, SSD upgrades, and GPU upgrades all possible, unlike the iMac Pro.

When it comes to the higher-tier 24 and 28-core processor options in the Mac Pro, we can expect to see performance that far exceeds what's possible with an iMac Pro as the 2017 iMac Pro tops out at the 18-core Xeon processor option.

JPack
Another big difference: You can't buy $400 wheels for the iMac.
Score: 32 Votes (Like | Disagree)

beaker7
The scores are pretty embarassing for a pro machine in 2018.
Score: 16 Votes (Like | Disagree)

MikeMo
Of COURSE the benchmarks are similar when the machines have similar hardware! The Mac Pro begins to shine when you opt for more power. OF COURSE. Like, DUH! The base model is slower than the high end model. Whoda thunk it!
Score: 16 Votes (Like | Disagree)
Read All Comments