Mac threat detections were on the rise in 2019, according to data shared by Malwarebytes, a company that makes anti-malware software for Macs and Windows PCs.

Looking at the top 25 threat detections in 2019, six of those were Mac threats, with Mac threats accounting for 16 percent of total detections. Malwarebytes found this number significant because its Mac user base is 1/12 the size of the PC user base, but Malwarebytes does not provide direct year-over-year comparisons of Mac malware numbers. 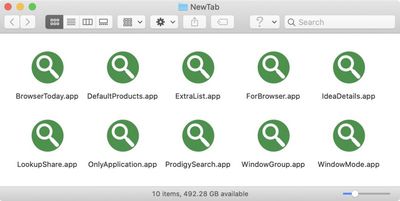 For the first time in 2019, Mac malware broke into the top five most-detected threats, accounting for the second and fifth-most detected threats during the year.

The number two malware was Mac adware known as NewTab, accounting for four percent of overall detections across platforms. NewTag is adware that uses browser extensions to modify the content of webpages, and it's found in Chrome. It is no longer able to be installed in Safari because of changes Apple has made to extensions.

The number five malware, PUP.PCVARK, was responsible for three precent of total detections. PUP.PCVARK (with PUP standing for potentially unwanted program) is a collection of Mac programs not intentionally installed by the user.

Malwarebytes says there were 9.8 detections per Mac in 2019, compared to 4.2 detections per device for Windows PCs. That may sound significant, but there are caveats with that data point.

All of the machines used for these figures have Malwarebytes installed, and Mac users tend to believe antivirus software is unnecessary. Macs represented in this data may have "already had some kind of suspected infection" prompting users to install the Malwarebytes software, which would skew the numbers.

For that reason, Malwarebytes believes the overall threat detection rate for all Macs is not as high as its data sample suggests.

Though Malwarebytes suggests Mac malware is on the rise, it's worth noting that the threats Macs are facing consist primarily of adware and "potentially unwanted programs." There are more nefarious malware programs able to infect Macs, but these are more targeted and limited in scope, so unlikely to affect most Mac users.

Attirex
“Floors Are Dirtier Than Ever According to Swiffer Analysis.”
Score: 16 Votes (Like | Disagree)

Swazaloo
"Mac Threat Detections on the Rise" . -- Says company who stands to profit from people buying their software to treat said detections.
Score: 13 Votes (Like | Disagree)

DoctorTech
So we have a scary looking chart but we don't really know if the data is accurate and some of what we are calling malware might be things users intentionally added to their browsers that we decided to call "potentially unwanted programs".

I have been a Malwarebytes user for several years now and I like their software but I hate this type of scare tactic "journalism" / marketing.
Score: 10 Votes (Like | Disagree)

So I guess the pre-installed Windows Defender is doing its job. I think its about time that macOS should have an in-house av. The first thing I did after setting up my Macbook Air was to install MalwareBytes and security apps from Objective-See.

It already has it, XProtect ('https://www.apple.com/business/docs/resources/macOS_Security_Overview.pdf').
Score: 8 Votes (Like | Disagree)

TomMcIn
Number 2 goes with Google Chrome so is really a Google problem. Would have been helpful if they told the readers how PUP.PCVARK gets on to a system.
Score: 7 Votes (Like | Disagree)

Lalatoon
So I guess the pre-installed Windows Defender is doing its job. I think its about time that macOS should have an in-house av. The first thing I did after setting up my Macbook Air was to install MalwareBytes and security apps from Objective-See.
Score: 5 Votes (Like | Disagree)
Read All Comments