Apple's new Mac Pro is now available to order, but the rack-mounted version of the computer remains listed as "coming soon" on Apple's online store, with pricing set to start at $6,499 in the United States. 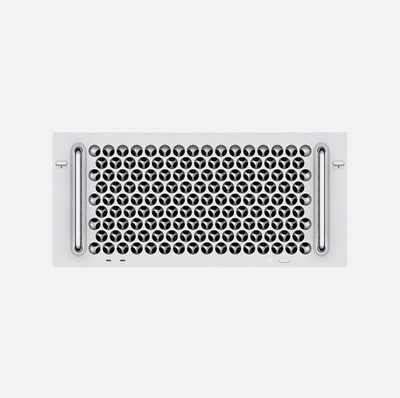 The rack-mounted ‌Mac Pro‌ has repositioned handles and carries a $500 premium compared to the regular new ‌Mac Pro‌ tower, which starts at $5,999. As the description implies, this version of the ‌Mac Pro‌ is designed for rack deployment in edit bays, machine rooms, and other professional settings.

In a press release, Apple previously said the rack-mounted ‌Mac Pro‌ would be available this fall, which ends December 21. However, given the ambiguity of "coming soon," it is unknown if Apple will still meet that timeframe.

Ask yourself who buys those.
Score: 8 Votes (Like | Disagree)

Ask yourself who buys those.

Ask yourself who buys those.

I was just recently collecting quotes for a development lab here at work, and we were looking at three rack-mounted Dell servers priced at about $60,000 each.

It's not that crazy, if that's the kind of power you need.
Score: 2 Votes (Like | Disagree)

And companies, not individuals for the most part.
Score: 2 Votes (Like | Disagree)

So, not the guy with 43 subscribers on his YouTube channel reviewing tech gear From 2017 and posting how expensive the maxed out version pro is on Apple forums?
Score: 2 Votes (Like | Disagree)
Read All Comments

Friday September 18, 2020 12:21 pm PDT by Juli Clover
Apple in iOS 14 added Picture in Picture to the iPhone, a feature designed to let you watch a video in a small screen on your device while you continue to do other things on the phone. When Picture in Picture was working with YouTube The YouTube app doesn't support Picture in Picture, but up until yesterday there was a functional workaround that allowed videos from YouTube.com to be watched...
Read Full Article • 204 comments

Friday September 18, 2020 4:50 am PDT by Hartley Charlton
Epic Games has announced that "Fortnite: Save the World" will no longer be playable on macOS, after Apple terminated Epic Games' developer account. Fortnite has been in violation of the ‌App Store‌ rules since August 13, when it introduced a direct payment option that skirted Apple's in-app purchase system by allowing payments directly to ‌Epic Games‌. Shortly after Epic blatantly...
Read Full Article • 209 comments