Apple is considering bundling AirPods with new iPhone models in 2020, according to hit-or-miss Taiwanese publication DigiTimes. 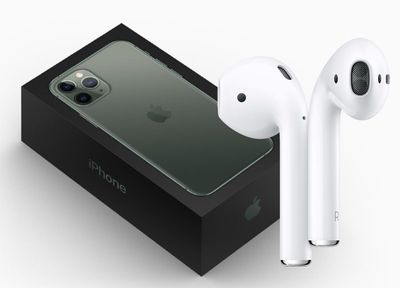 The report claims "smartphone vendors including Apple, Samsung, and Xiaomi are looking to bundle their new models with TWS earbuds next year," citing unnamed industry sources. "TWS" or "truly wireless stereo" earphones include the likes of AirPods and Samsung's Galaxy Buds.

We're pretty skeptical about this report due to the price of AirPods, which start at $159. It's hard to imagine Apple including such a costly accessory in the box with new iPhones next year without raising the price of the iPhones overall… not to mention that DigiTimes doesn't have a stellar track record with Apple rumors either.

AirPods are also tremendously popular by all indications, so it is hard to see why Apple would give them away for free when millions of customers are clearly happy to fork over a few hundred dollars for them already. In fact, the new AirPods Pro are in such high demand that Apple is reportedly doubling production.

Apple has included basic, wired EarPods with a Lightning connector in the box with iPhones for several years. Those earphones likely cost Apple very little to manufacture, retailing for just $29 on its website.

While this rumor seems questionable for now, it is certainly possible that Apple simply feels it is time to include something more modern than EarPods with its iPhones. AirPods are already said to be the world's best selling truly wireless earphones, and bundling them with iPhones would only extend that lead.

If it were to happen, we would imagine AirPods would only be bundled with higher-end iPhone 12 Pro models. We're still a little under ten months away from those devices, so we'll see if this rumor gains any traction as time goes on.

itsmilo
Others might, I don’t think Apple will. Just look how long it took Apple to include a better charger
Score: 45 Votes (Like | Disagree)

HiVolt
I hope not. That would really increase the price of the already crazy priced iPhones.

What I hope they would do, is a bundle discount when purchasing an iPhone with AirPods or AirPods Pro.
Score: 39 Votes (Like | Disagree)

Good! I hope they do! In my opinion, Apple should have included them with the iPhone the whole time. If you’re going to remove the headphone jack from your product then you ought to include the proper wireless alternative in the box, not those useless lighting headphones.

How are Bluetooth earphones any more “proper” a replacement for the headphone jack earphones than lightning earphones?
Score: 17 Votes (Like | Disagree)

That’s a polite way of putting it!
Score: 14 Votes (Like | Disagree)

Except, Apple did provide an alternative, they provided the lightning adapter for those who still wanted to use their wired headphones. (If I want a pair of Bluetooth headphones, I would rather have my own choice of what I want that fits me in terms of style/function.)

not those useless lighting headphones.

I train in the gym five days a week, I’d say at least 80% of headphones I see in the gym are the lightning earbuds, so clearly they’re _not_ useless if consumers are using them.
Score: 11 Votes (Like | Disagree)

mazz0
I agree bundling wires headphones seems archaic, but the solution isn’t to bundle wireless ones, it’s to bundle none. People can buy some as and when they’re needed. Bundling then with every phone is wasteful.
Score: 10 Votes (Like | Disagree)
Read All Comments

Sunday January 23, 2022 10:32 am PST by Juli Clover
Apple is working on a number of new products that are set to launch this fall, and Bloomberg's Mark Gurman says that it will be "the widest array" of new devices that Apple has introduced in its history. In his latest "Power On" newsletter, Gurman explains that Apple is working on four new flagship iPhones (iPhone 14, iPhone 14 Max, iPhone 14 Pro, and iPhone 14 Pro Max), an updated low-end Ma...
Read Full Article • 265 comments

Sunday January 23, 2022 2:59 am PST by Tim Hardwick
Apple has always emphasized the depth of thought that goes into the design of its products. In the foreword to Designed by Apple in California, a photo book released by the company in 2016, Jony Ive explains how Apple strives "to define objects that appear effortless" and "so simple, coherent and inevitable that there could be no rational alternative." But every once in a while even Apple...
Read Full Article • 431 comments