Ahead of World AIDS Day, which takes place on December 1, Apple has begun turning the Apple Store logos of many of its retail locations red. Apple's red logos are an annual tradition and mark one of the few times a year that Apple changes its logo colors.

Photos of ‌Apple Store‌ locations with red logos have begun popping up on Twitter and Instagram, and by the time December 1 rolls around on Sunday, Apple's stores worldwide will be temporarily featuring the new design. 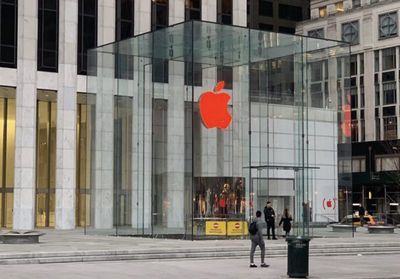 Apple will be promoting World AIDS Day in its retail locations over the course of the next week. From November 25 to December 2, Apple will donate $1 to (RED) for every purchase made with Apple Pay on Apple.com, the ‌Apple Store‌ app, and Apple retail stores, up to a total of $1 million.

(RED) has been a longtime Apple partner charity, and since 2006, Apple has raised more than $220 million through promotions like this and the sale of (RED)-branded products and accessories. Funds raised by (RED) go towards HIV/AIDS programs in Africa as part of The Global Fund to fight AIDS, Tuberculosis, and Malaria.
Tags: (PRODUCT)RED, Apple Store
[ 23 comments ]

iapplelove
I remember going to jr high in the late 80s and contracting HIV was an automatic death sentence.

Glad to see great strides with medicine and education with this epidemic.

Those unfortunate to contract the virus now a days can still lead an almost normal healthy lifestyle.
Score: 19 Votes (Like | Disagree)

Plutonius
Does this actually do anything about AIDs ?

The cynical part of me just looks at this as advertising for Apple.
Score: 8 Votes (Like | Disagree)

Why not just promote the cause and donate the $1 million dollars and call it a day?
Score: 6 Votes (Like | Disagree)

Quite a few posts discussing health insurance and politics have been removed. If you would like to discuss those topics, please start a thread in the Politics, Religion, and Social Issues forum and keep that discussion out of this thread. Thank you.
Score: 3 Votes (Like | Disagree)

xxray
I’m really glad Apple does this and contributes to RED. Really good of them.
Score: 3 Votes (Like | Disagree)

gkarris
Brings back memories - as a kid at the Computer Store looking at the stack of Apple ][ boxes with the red Apple on them...