In June 2018, Apple announced that its Maps app would be rebuilt "from the ground up" with more accurate details like grass and trees, pools, parking lots, exact building shapes, sports areas like baseball diamonds and basketball courts, and pedestrian pathways that are commonly walked but previously unmapped. 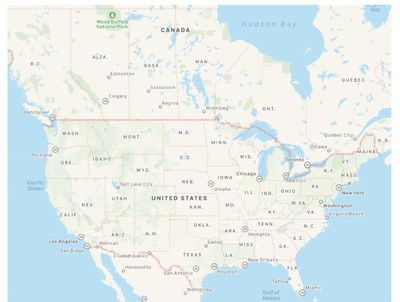 Apple Maps with revamped data in Western and Midwestern U.S. via Justin O'Beirne
The revamped Apple Maps experience first rolled out to Northern California during iOS 12 beta testing last year and has since extended to Southern California, Arizona, New Mexico, Texas, parts of the Gulf Coast, and several Northeast states such as New York, New Jersey, Pennsylvania, and Massachusetts.

The expansion continued this week, as Apple has finished its rollout of the improved maps in parts of the West and Midwest regions of the United States. This includes Colorado, Utah, Nevada, Wyoming, Idaho, Oregon, Montana, Washington, West Virginia, Ohio, Michigan, and parts of Illinois and Indiana.

Justin O'Beirne has fantastic coverage of the Apple Maps revamp, noting that the improved maps now cover 27 states fully and another six states partially. In June, Apple said the improved maps would cover the entire United States by the end of 2019, followed by additional countries in 2020.

As usual, some users will see the revamped maps in their region sooner than others, so we wait until the rollout has extended more widely to report the news. If you do not see the improved data yet, give it some time.

(Thanks to Matt, Frank, Noah, Alan, and all others who tipped us!)

citysnaps
Have been using Apple Maps exclusively for the last 5 years or so and it has never let me down. I also appreciate the updates and improvements.
Score: 17 Votes (Like | Disagree)

zorinlynx
I think they're afraid to venture into Florida. I don't blame them. :)
Score: 14 Votes (Like | Disagree)

now i see it
Like the early (and current) days of Siri, a lot of people have given up on Apple Maps and by habit will never use it again. I keep both the Apple Maps & Google Maps apps side by side in my Navigation folder and I never ever click on Apple Maps to find anything. I guess having such a bad experience with it so many times in the past has left an indelible impression and I avoid it now by instinct.
Maybe it's a lot better now, but I'll never use it. I just can't bring myself to tapping it's icon. Too many bad memories.
Score: 10 Votes (Like | Disagree)

jayhawk2112
It is nice that Apple is making these updates but at the same time Google Maps is so far ahead that I don't see any reason to use Apple Maps other then perhaps some loyalty to Apple as a company. I don't especially like Google but fundamentally the job of a map it to get me where I am going and Google does that.
Score: 10 Votes (Like | Disagree)

Just sayin...
As of yesterday, Apple Maps is still giving me incorrect directions where both Waze and Google Maps are correct. There is a freeway intersection near my house where Apple Maps insists that I need to head west one exit, make a u-turn at the next offramp, and THEN go east. Both Google Maps and Waze have me just take the eastbound freeway entrance. I’ve reported this issue over a dozen times...and it is a medium traffic (not rural, not 2 huge freeways intersecting) intersection. This simple problem does not inspire faith that their product will function properly in areas I do not know...

Like the early (and current) days of Siri, a lot of people have given up on Apple Maps and by habit will never use it again. I keep both the Apple Maps & Google Maps apps side by side in my Navigation folder and I never ever click on Apple Maps to find anything. I guess having such a bad experience with it so many times in the past has left an indelible impression and I avoid it now by instinct.
Maybe it's a lot better now, but I'll never use it. I just can't bring myself to tapping it's icon. Too many bad memories.

I felt the same until getting CarPlay, which is much more featureful with Apple Maps. It's made me start using it again and for a while I was double-checking their routing against Google Maps, but nowadays it's pretty good and the routing was essentially the same. It's worth another shot if you use an Apple Watch, CarPlay, or anything else that connects to Apple Maps. If it's just the standalone app on your device that you're using, I'd probably still use Google Maps just out of the same old fear you mentioned.
Score: 6 Votes (Like | Disagree)
Read All Comments