Disney+ Streaming Service is Now Available to Watch on iOS, tvOS, and More

Disney's new streaming service, Disney+, is now available in the United States and can be accessed across a range of supported devices, including iPhone, iPad, Apple TV, Android smartphones, Roku streaming boxes, Amazon Fire TV, and more. You can download the Disney+ app on iOS and tvOS, sign up for the service at $6.99/month or $69.99/year, and then begin watching your favorite Disney shows and movies. 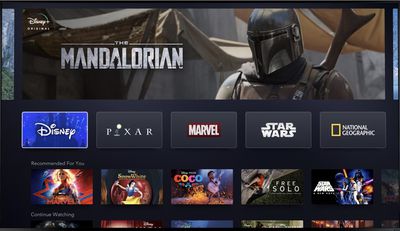 At launch, Disney+ already has one of the biggest back catalogs of content among the major streaming services, stretching back over a half century to include classic Disney films like Snow White and the Seven Dwarves, Bambi, and Miracle on 34th Street. Disney+ content ranges from 1937 to 2019, essentially including every film produced under The Walt Disney company umbrella, as well as its subsidiaries including Pixar, Marvel, Star Wars, and National Geographic.

In addition to classic content, Disney is producing new shows, movies, and documentaries for Disney+. Today you can watch new TV shows like The Mandalorian, Encore!, The World According to Jeff Goldblum, and High School Musical: The Musical: The Series. Original movies include Noelle starring Anna Kendrick and the Lady and the Tramp reboot starring Justin Theroux and Tessa Thompson. There are also behind-the-scenes looks at aspects of the Disney company, including One Day at Disney, which highlights daily routines of cast members at Disney Parks.

Disney+ is launching just a few days after Apple debuted its own streaming TV service, which also uses the "plus" naming style, called Apple TV+. On Apple's service you can pay $4.99/month to watch a handful of original TV shows like The Morning Show, For All Mankind, Dickinson, See, Ghostwriter, Helpsters, and Snoopy in Space. Apple plans to add new shows and movies monthly, next up including Servant from producer M. Night Shyamalan and The Banker with Samuel L. Jackson and Anthony Mackie.

Disney+ is compatible with the ‌Apple TV‌ app, so all of the TV shows and movies you stream in the Disney+ app will be updated and added to Up Next in the TV app, which also syncs to iOS. For more information on Disney+ and all of the content that you can watch inside of the new service, check out Disney's website and head to the App Store to download the app on iOS today.

Disney+ is also now available in Canada and the Netherlands. The service will launch in Australia and New Zealand on November 19, 2019, followed by the United Kingdom, Ireland, Germany, France, Italy, and Spain on March 31, 2020.

johnyslats
The Mandalorian is awesome. I have spoken ;)
Score: 15 Votes (Like | Disagree)

Better ? I tried it and the Disney Pixar movie Toy Story 4 isn’t available on their own streaming service but it is on Apple TV +

No, it is not available on ATV+, you can only buy it for additional $ as any other DVD release.
Score: 15 Votes (Like | Disagree)

Far Better than appletv+ at launch. Just waiting now for verizon to email me so I could take advantage of their 1 year free promotion.

there's nothing i'm interest to look from Disney

So far Apple TV+ been very good with their shows.
Score: 14 Votes (Like | Disagree)

falkon-engine
Far Better than appletv+ at launch. Just waiting now for verizon to email me so I could take advantage of their 1 year free promotion.

Edit: it's live. Verizon said they'd email me but never did... but I was able to get the 1-year free trial nonetheless, and they have a pretty solid selection of movies. Too bad all of this stuff isn't available from 1 provider for a reasonable fee... YouTubeTV, Netflix, SlingTV, AppleTV+,Disney+, et al.
Score: 10 Votes (Like | Disagree)

racer1441
I already have found more to watch in 20 minutes on Disney + than the awful shows on Apple TV. I really wish Apple would stay out of content production and just focus on fixing their buggy operating systems!
Score: 10 Votes (Like | Disagree)

I really wish Apple would stay out of content production and just focus on fixing their buggy operating systems!

I don't, so far the shows are really good which is also proven by wide audience.

Also do you think it's same people doing these shows than people who are coding iOS? :)
Score: 9 Votes (Like | Disagree)
Read All Comments