Apple's new Mac Pro, still listed on Apple's website as "coming this fall," has been spotted in the wild this weekend at the studio of DJ and producer Calvin Harris. 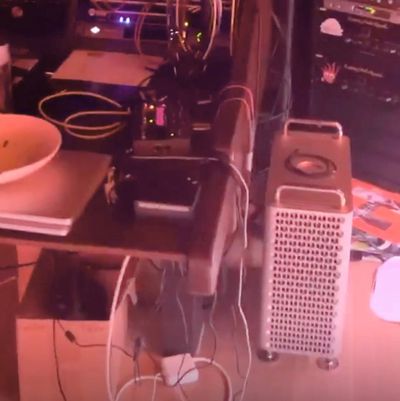 New ‌Mac Pro‌ spotted in Calvin Harris Instagram video
On Saturday, Harris posted an Instagram story featuring some of his music and offering his followers a peek into his production studio, in which a ‌Mac Pro‌ with signature cheese grater case and carry handles can be seen sat on the floor next to a desk.

The sighting suggests Apple has shared the new high-throughput machine with creative professionals to give them a feel for its power and potential ahead of its public release, which could be any day now.

The all-new ‌‌Mac Pro‌‌ boasts up to 28-core Intel Xeon processors, up to 1.5TB of ECC RAM, up to 4TB of SSD storage, and up to AMD Radeon Pro Vega II Duo graphics with 64GB of HBM2 memory. The computer also has eight PCIe expansion slots for maximum performance, expansion, and configurability.

A new design includes a stainless steel frame with smooth handles and an aluminum housing that lifts off for 360-degree access to the entire system. The housing also has a unique lattice pattern to maximize airflow and quiet operation.

Apple announced the ‌Mac Pro‌ on June 3, and the company has been teasing a fall release on its website ever since, without specifying a launch date. The machine received FCC approval on October 30, suggesting pre-order availability is not far away.

The ‌Mac Pro‌ starts at $5,999, so this machine is only for the most serious professional users. They could also twin it with the $6,000 Pro Display XDR, which is expected to be released at the same time.

djcerla
Some people will never be happy with anything.

Check out Linus Tech Tips - there's a PC case on the market that is IDENTICAL to the Mac Pro's. Could be a hoax...

Why would Calvin Harris stage a hoax?
Score: 31 Votes (Like | Disagree)

Wow .... I wonder how much this will cost him - surely a breach of whatever NDA Apple had him sign.

I wouldn’t be surprised if this is a ‘leak’ in collaboration with Apple.
Score: 30 Votes (Like | Disagree)

loekf
So finally we know what an expensive unicorn looks like

If its the real thing, very disappointed he could not afford the wheels
Score: 29 Votes (Like | Disagree)

scottishwildcat
It’s designed to sit under a desk for the next 5-10 years. Nobody who really needs one is going to care what it looks like.
Score: 29 Votes (Like | Disagree)

dazzer21-2
Check out Linus Tech Tips - there's a PC case on the market that is IDENTICAL to the Mac Pro's. Could be a hoax...
Score: 18 Votes (Like | Disagree)
Read All Comments