Apple Arcade Now Has 100 Games With Addition of New Titles Today, Including 'Guildlings'

Apple Arcade today added six new games to the subscription service, all available to play on iPhone, iPad, and Apple TV (via Engadget): 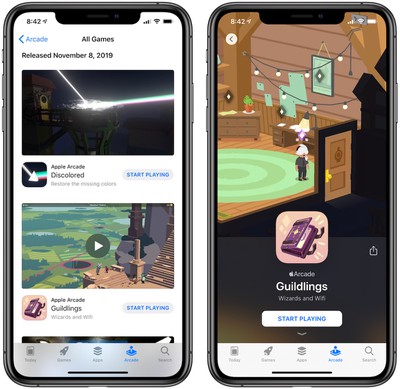 All six games are available to play on ‌iPhone‌, ‌iPad‌, and ‌Apple TV‌, with Discolored, Guildlings, and Sociable Soccer also available on Mac.

With the addition of these six games, ‌Apple Arcade‌ has now reached 100 total games on iOS and tvOS, and 92 on macOS. Apple has been adding new games to ‌Apple Arcade‌ over the weeks, following the service's launch on September 19.


With a $4.99/month subscription to ‌Apple Arcade‌, you can gain unlimited access to these 100 games for ‌iPhone‌, ‌iPad‌, and ‌Apple TV‌ (as well as many on the Mac). If the game is on ‌Apple Arcade‌, it does not have any in-app purchases or ads of any kind.
Tag: Apple Arcade Guide
[ 41 comments ]

iMi
I’m starting to suffer from “subscription fatigue” with so many paid services now.
Score: 28 Votes (Like | Disagree)

Glockworkorange
If you're into quirky games nobody else would make? Apple Arcade is for you.
Score: 10 Votes (Like | Disagree)

fmcshan
I would be all for an Apple subscription bundle with iCloud storage, Apple Music, Apple TV+, Apple News+, and Apple Arcade all bundled in. Or maybe Apple could develop a bundle where you pick certain services at one time. Just a thought...
Score: 8 Votes (Like | Disagree)

Honestly been very disappointed with Apple Arcade. Does its cancel your access immediately or do you need to wait till the end of the month to cancel. I play more of the normal games like Clash of Clans and pay the $5 a month for the perks there. More enjoyable, more friends are on it, and established.

Clash of Clans? That cancerous freemium pay-to-win game that’s engineered to perfectly encourage a cycle of addiction and IAPs? Those are the very games Apple Arcade is trying to avoid.
Score: 8 Votes (Like | Disagree)

I’m starting to suffer from “subscription fatigue” with so many paid services now.

There's something that I hate about adding monthly payments to my life, even if I think it's worth what I'm paying. My only subscriptions are Apple Music (which gives me Apple TV+ for free) and Netflix. I'm probably going to end up cancelling Netflix ?
Score: 7 Votes (Like | Disagree)

Jeaz
I've been pleasantly surprised about the Arcade. Didn't have high hopes before, but there's been really nice games in there so you are easily getting your 5 bucks a month value. The key question is how they'll keep up over time.
Score: 6 Votes (Like | Disagree)
Read All Comments