At its annual MAX conference today, Adobe announced a range of new features for its Creative Cloud suite of software for Macs and PCs, including Photoshop, Illustrator, Lightroom, InDesign, and more. 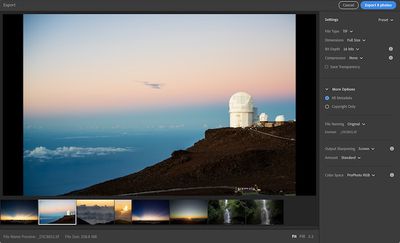 Adobe Lightroom
Adobe is releasing a major update to Photoshop on the desktop today with several improvements based on its Sensei artificial intelligence technology, including new capabilities in the Object Selection Tool and Content-Aware-Fill.

Adobe has added three ways to identify where in your image you want Content-Aware Fill to look for source pixels as fill content:

The latest version of Photoshop is faster for many tasks, including opening files on a Mac. Adobe has added new quick action buttons to accelerate common tasks, such as the ability to one-click to remove a background, select a subject while in the pixel layer properties panel, or quickly convert text layers into a frame or shape.

Preset workflows have been overhauled, with new, dedicated panels and behaviors for gradients, patterns, and shapes. Presets can be organized into groups, and you can drag and move to rearrange and re-order them.


To learn more about the new features and improvements in Photoshop, read Adobe's blog post and its what's new in Photoshop page.

Following months of beta testing, Adobe today is also making Photoshop on the iPad available to all Creative Cloud customers who have a subscription to Photoshop. Photoshop on the ‌iPad‌ is based on the same code base as the desktop version, but it is reimagined for a mobile, touchscreen-based user experience.

With the ‌iPad‌ version, you can open and edit PSDs, view and edit your layered documents, and take advantage of core functionality such as compositing, masking, and retouching. Adobe plans to add several new features to the app over time. Read our Photoshop for iPad post for more details.

Adobe today also announced that it has integrated cloud document capabilities into Photoshop and expanded support to PSDs. This allows you to access and work on projects across devices, including Photoshop for Mac and ‌iPad‌, with all edits seamlessly saved to the cloud with an auto-save feature.

Other updates to the Creative Cloud suite:

New features previewed earlier this year for Premiere Pro, After Effects, Audition, and Character Animator are also available as of today.

Eauboy
Do they work with Catalina?
Score: 4 Votes (Like | Disagree)

picaman
Moved on to alternatives (e.g. Pixelmator Pro) when I could no longer own my Adobe software. Haven’t missed any of it, for my purposes.
Score: 2 Votes (Like | Disagree)

Moved on to alternatives (e.g. Pixelmator Pro) when I could no longer own my Adobe software. Haven’t missed any of it, for my purposes.

You never owned the software, you just paid for a license to use it.
Score: 1 Votes (Like | Disagree)

Do they work with Catalina?

Yes. Nothing special. I don't understand what is that major release.
At least Photoshop - it has some AI improved selection tools which are nice but honestly it's not an OMG upgrade. I haven't yet tested it with sidecar...... I don't know if it can work with it properly.
Score: 1 Votes (Like | Disagree)
Read All Comments