Update: Fitbit today announced that it has entered into a definitive agreement to be acquired by Google for approximately $2.1 billion.

More than 12 years ago, we set an audacious company vision – to make everyone in the world healthier. Today, I'm incredibly proud of what we've achieved towards reaching that goal. We have built a trusted brand that supports more than 28 million active users around the globe who rely on our products to live a healthier, more active life. Google is an ideal partner to advance our mission. With Google's resources and global platform, Fitbit will be able to accelerate innovation in the wearables category, scale faster, and make health even more accessible to everyone. I could not be more excited for what lies ahead.

Fitbit has been a true pioneer in the industry and has created terrific products, experiences and a vibrant community of users. We're looking forward to working with the incredible talent at Fitbit, and bringing together the best hardware, software and AI, to build wearables to help even more people around the world.

Fitbit will continue to remain platform-agnostic across both Android and iOS, and the company says Fitbit health and wellness data will not be used for Google ads.

The transaction is expected to close in 2020, subject to regulatory approvals.


Google is in talks to acquire popular fitness tracker maker Fitbit, according to Reuters, which could help the company better compete with the Apple Watch along with its existing Wear OS smart watch platform. 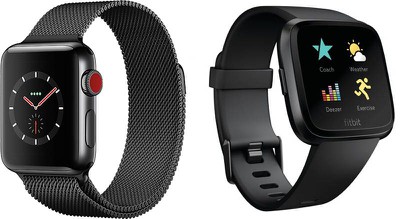 The report claims there is no certainty that the negotiations between Google parent company Alphabet and Fitbit will lead to any deal, and the exact price that Google has offered for Fitbit is unknown at this time.

Google does not currently sell any own-brand fitness trackers or smart watches, but its Wear OS platform runs on smart watches sold by several third-party brands, such as LG, Huawei, and Fossil.

BWhaler
A spyware advertising company will have real-time access to my health information?

mtneer
I think we can call it on Fitbit if this happens. I don't see Google (and its employees) having the focus necessary to succeed. Fitbit will languish around for a few years and then either quietly die, or be spun off into some unknown Chinese OEM who wants to buy a name.
Score: 5 Votes (Like | Disagree)

There isn't enough popcorn in the world.
Score: 4 Votes (Like | Disagree)

Monday July 13, 2020 6:50 am PDT by Joe Rossignol
Earlier this year, Apple agreed to settle a U.S. class action lawsuit that accused the company of "secretly throttling" older iPhone models. Now, eligible iPhone owners are beginning to be notified about their legal rights and options. Under the proposed settlement, Apple will provide a cash payment of approximately $25 to each eligible iPhone owner who submits a claim, with its total payout ...
Read Full Article • 117 comments