Apple premiered its futuristic thriller "See" at the Regency Village Theater in Westwood, California, on Monday night. The show is set to debut on Apple TV+ when the service launches on November 1. 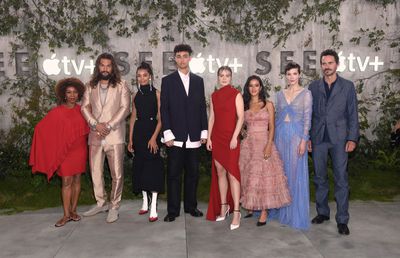 The epic post apocalyptic drama takes place in a world in which much of the human population has been wiped out by a virus and the remaining survivors have been left blind. According to Apple, dozens of visually impaired and blind actors were cast for the show, and consultants on blindness, biology and survival were hired to make the drama as realistic as possible.

Jason Momoa plays the lead role of Baba Voss, a fearless warrior, leader, and guardian. Momoa is well-known for his role as Khal Drogo in "Game of Thrones," as well as roles in "Aquaman," "Stargate Atlantis," and "Conan the Barbarian."

Jason Momoa at the premiere of "See".
Alfre Woodard plays Paris, an advisor and a priestess. Woodard has starred in movies that include "12 Years a Slave," "Annabelle," and "Captain America: Civil War," and she has had roles in several TV shows, such as "Luke Cage," "Desperate Housewives," and "State of Affairs."

The first three episodes of "See" will be available to watch on ‌Apple TV+‌ in over 100 countries and regions around the world from November 1, with new episodes scheduled to roll out weekly, every Friday.

The streaming service will be available on the Apple TV app on iPhone, iPad, ‌Apple TV‌, iPod touch, Mac and other platforms, including online via www.tv.apple.com. Customers who purchase any new ‌iPhone‌, ‌iPad‌, ‌Apple TV‌, Mac or iPod touch starting September 10, 2019, are eligible for one year of ‌Apple TV+‌ for free.

I'll watch it only if it has sex and gore à la Game of Thrones.

StudyFlo
Why does everybody on the left and right wear gray shirts? Are those Apple employees?
Score: 6 Votes (Like | Disagree)

Agreed. Their initial lineup looks like some quality shows

No that was just a rumor.
Score: 5 Votes (Like | Disagree)

Right... since when does Apple throw away money? I thought Cook was a bean counter?

It seems you might not know who’s running the show, so to speak. That would be Jamie Erlicht and Zack Van Amburg.

Erlicht and Van Amburg have served as presidents of Sony Pictures Television since 2005. Under their leadership, the studio’s slate of original primetime series more than tripled, growing to include many of TV’s most acclaimed shows. They have extensive expertise producing television for global audiences and creating programming for a wide range of services including shows for Amazon, Hulu and Netflix. Their incredible roster of programs — which have won 36 Emmys and dozens of Golden Globes, AFI and WGA awards — have included fan favorites such as Better Call Saul, The Blacklist, Bloodline, Breaking Bad, The Crown, Damages, The Goldbergs, Justified, Preacher, Rescue Me, The Shield, Sneaky Pete and many more.

Based on their demonstrated skill in identifying compelling projects to develop, and also in producing high-quality, successful content, I expect Apple will have some great stuff. And it doesn’t appear there’s any reason to be worried that Apple is going to get taken advantage of by Hollywood.
Score: 5 Votes (Like | Disagree)
Read All Comments