Reporting traffic accidents and slowdowns has long been a feature on Android and now it will also be available for iPhone users to contribute to Google's crowd sourced incident reporting. 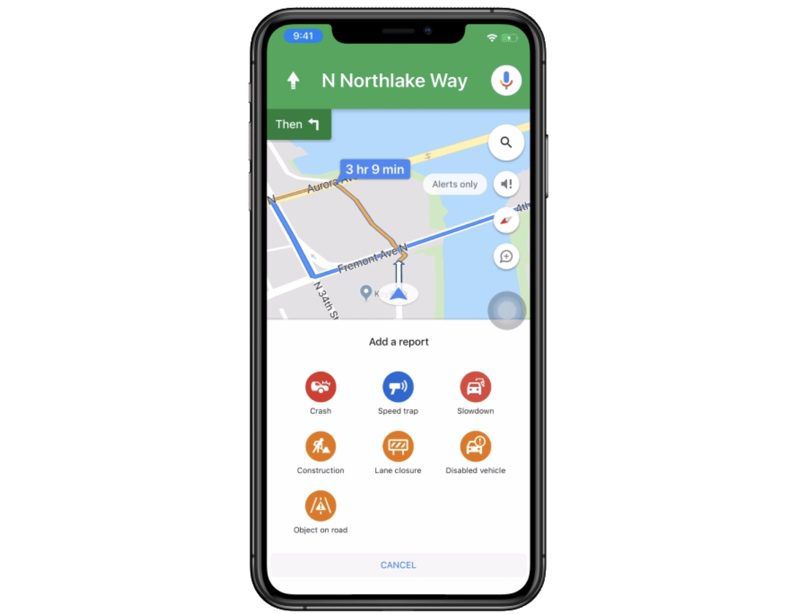 Google is also introducing the ability to report on several kinds of new incidents, including construction, lane closures, disabled vehicles, and objects in the road, which will mean that Google Maps users will be notified when there is an upcoming traffic hazard.

Reporting an incident can be done by tapping on the "+" sign in Google Maps and the selecting "Add a Report." The new reporting feature will be rolling out to iOS users this week.

C DM
Sounds like more of Waze features are getting integrated into Google Maps.
Rating: 12 Votes

steve217
Will this be available for Hong Kong?
Rating: 10 Votes

MisterSavage
Surprised that it took them so long to add this functionality considering that Google owns Waze.
Rating: 9 Votes

boccabella
Speed traps? But Tim Cool said it was against App Store rules to aide and abet lawbreaking.
Rating: 6 Votes

one more
Useful, especially if drivers can submit their reports by voice, so no need to touch their phones at all. I seem to remember Apple filing a patent for something similar years ago, so am surprised we still cannot tell Siri about accidents, road closures, etc.
Rating: 5 Votes

sofakng
Does Google Map currently (on any platform) share and show the same data as Waze?

For example, if somebody reports traffic/police/etc on Waze, does it appear on Google Maps?
Rating: 3 Votes

Yes, this. I'm surprised they make this "touch-only". That's going backwards. This should be a "voice-only" feature.


I've found voice features to be fairly useless when driving. There's a lot of noise in the car, and half the time the system doesn't understand what I'm saying. It ends up being less safe because I'm frustrated and have to touch the screen ANYWAY to end up doing what I want.

I'd prefer a simple touch interface with big buttons that let me do what I'm doing quickly. My phone is in a holder so it ends up equivalent to changing stations on the radio.
Rating: 3 Votes

I wonder if they’ll ever discontinue Waze.


I doubt it. Maps is such a large and sprawling app that features have to come slowly so they don’t break anything.
I can see keeping Waze for beta testing new features and slowly integrating them into the main Maps app.
Rating: 3 Votes

I love Waze via CarPlay. I just wish Waze would split screen like Apple Map while using CarPlay. I also wish the reporting button in Waze was on the left side of the screen no the right side. Long reach in my Jeep.
Rating: 3 Votes
[ Read All Comments ]