Apple has pulled an app from the App Store that Hong Kong protestors have been using to track police movements, saying it violates the company's guidelines and local laws.

Apple approved HKmap Live last week after reviewing its decision to initially reject the app from the ‌App Store‌. 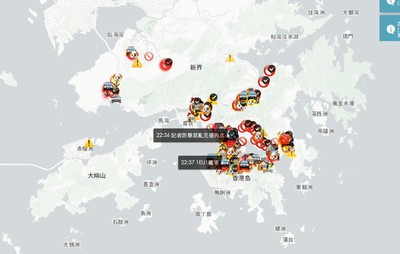 However, on Wednesday Apple was criticized by Chinese state media for its decision to make the app available. "Letting poisonous software have its way is a betrayal of the Chinese people's feelings," said the People's Daily.

The app has since been delisted from the ‌App Store‌ and Apple has issued the following statement:

We created the App Store to be a safe and trusted place to discover apps. We have learned that an app, HKmap.live, has been used in ways that endanger law enforcement and residents in Hong Kong. Many concerned customers in Hong Kong have contacted us about this app and we immediately began investigating it. The app displays police locations and we have verified with the Hong Kong Cybersecurity and Technology Crime Bureau that the app has been used to target and ambush police, threaten public safety, and criminals have used it to victimize residents in areas where they know there is no law enforcement. This app violates our guidelines and local laws, and we have removed it from the App Store.

In a series of tweets, the developers of HKmap Live said they disagreed with Apple's claim that the app endangered law enforcement and residents in Hong Kong, and argued that "there is zero evidence to support CSTCB's [the Hong Kong Police Force’s Cyber Security and Technology Crime Bureau] accusation that HKmap App has been used to target and ambush police, threaten public safety, and criminals have used it to victimize residents in areas where they know there is no law enforcement."

Earlier on Thursday, Apple also removed the app of news outlet Quartz from China's ‌App Store‌. The news organization told The Verge that Apple has removed its mobile app after complaints from the Chinese government, and said it had received a notice from Apple that the app "includes content that is illegal in China."

Demonstrations in Hong Kong began in March in response to an unsigned legal bill that threatened to allow extradition to mainland China. Since then, the protests have to expanded to demand that the city state retains its broader democratic rights. The special administrative region maintains separate governing and economic systems from that of mainland China under the principle of "one country, two systems".

Update 12:30 p.m.: In an internal Apple memo, Tim Cook notes that the removal of HKmap Live was a difficult decision but argues that the app was being for illegal purposes and in violation of ‌App Store‌ rules.

It is no secret that technology can be used for good or ill. This case is no different. The app in question allowed for the crowdsourced reporting and mapping of police checkpoints, protest hotspots, and other information. On its own, this information is benign. However, over the past several days we received credible information, from the Hong Kong Cybersecurity and Technology Crime Bureau, as well as from users in Hong Kong, that the app was being used maliciously to target individual officers for violence and to victimize individuals and property where no police are present. This use put the app in violation of Hong Kong law. Similarly, widespread abuse clearly violates our App Store guidelines barring personal harm.

Ask Tim Cook what he thinks human rights are. He will show you a rainbow watch band.
Score: 127 Votes (Like | Disagree)

atomic.flip
Tim Cook, you are a coward and a hypocrite. Period, end of story.

I think Apple should now remove Waze, since it also tracks police ambushes.

Ask Tim Cook what he thinks human rights are. He will show you a rainbow watch band.

I think the Board Of Directors should remove Tim Cook. Waze is just fine where it is. Then Apple should get serious about moving manufacturing outside of China. Samsung has already declared it is doing so.
Score: 83 Votes (Like | Disagree)

asdavis10
All that is missing is a tweet from Apple CEO Xi Jinping?
Score: 77 Votes (Like | Disagree)

Hopefully everyone in HK downloaded it before it got deleted.
Score: 63 Votes (Like | Disagree)