Linksys today announced the launch of a new subscription service that lets you use some of the company's existing Velop mesh Wi-Fi router systems as motion-sensing security devices. 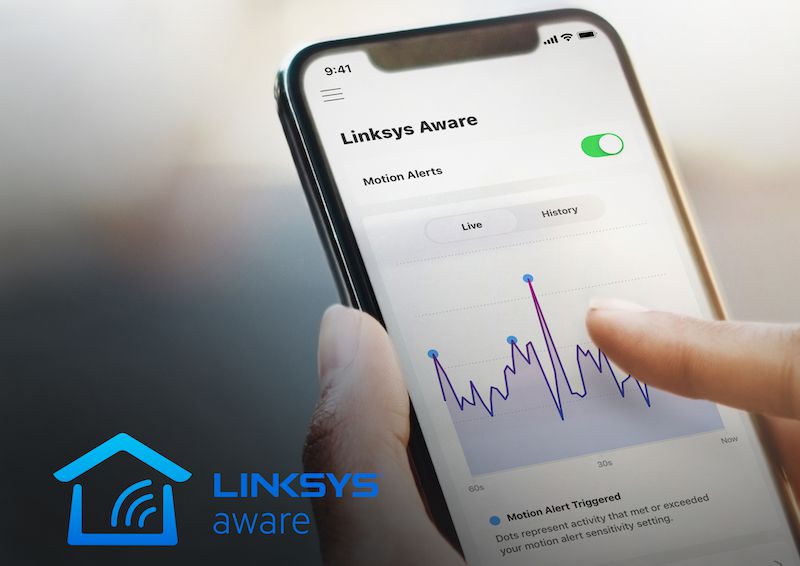 Dubbed Linksys Aware, the technology is initially compatible only with the company's Velop Tri-Band AC2200 routers, but will be rolling out to some of the brand's other mesh Wi-Fi products in a phased rollout.

Linksys Aware is able to sense motion in your house without the need to add cameras or other accessory devices, with the various mesh nodes detecting how movement in the vicinity affects Wi-Fi signals as the nodes communicate with each other. 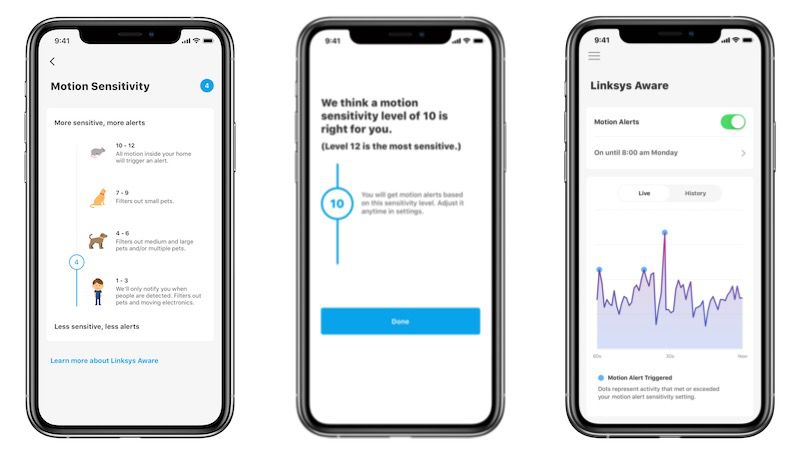 Users can customize the sensitivity level of the system to filter out pets of various sizes, for example, and once the motion threshold is exceeded you'll receive a notification on your phone.

As the system doesn't involve a camera, there's no way to remotely check in on the detected motion to see what it is, but at least you'll be alerted if unexpected motion is detected in your home. Motion events are stored for 60 days, so you can check back to see a recent history by hour, day or week. 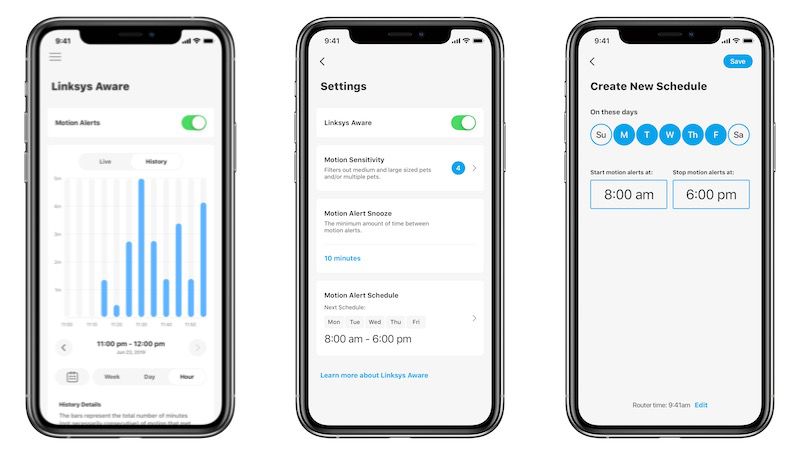 Linksys Aware is free for the first 90 days, after which a subscription priced at $2.99 monthly or $24.99 annually will be required. A firmware update and App Store app update will be rolling out today to add support for the feature.

With the discontinuation of its AirPort lineup of wireless routers, Apple has embraced Linksys as one of its primary third-party partners, selling several configurations of the Velop system online and in its retail stores.

Braderunner
$25/year? To be notified that something caused motion to be detected. With all the cameras available, that have motion detection...what's the point? Other than taking your money.
Rating: 11 Votes

mcdawg
Oh, screw you and the "recurring-revenue subscription-model" horse you rode in on, Slinksys.
Rating: 11 Votes

iModFrenzy
Was all for it till I saw a subscription.

It’s a cool feature, but there is no way this warrants a subscription. You can’t even see what’s causing the motion unless you have cameras. And at that point, most cameras like Ring, already have motion detection...
Rating: 9 Votes

centauratlas
Subscription based is just stupid. One owns the hardware, why should one have to pay extra for it?
Rating: 5 Votes

nutmac
The problem with these "security systems", beyond $25/year subscription fee, is lack of visual confirmation. If you are at work and you get an alert, are you going to drive home only to see that it was a false alarm?

Your money is far better spent on security camera, ideally one that would be supported by HomeKit Secure Video coming later this year.
Rating: 3 Votes

macduke
How long before a router company such as Eero, which is now owned by Amazon, starts doing this without telling you to track how many people, animals and children are in your house for targeted advertising?

This is precisely why Apple still needs to make routers. Creepy.
Rating: 2 Votes

I paid like $3000 in WiFi base stations, now I need to pay $25/year on top of that for a feature that uses no bandwidth or storage?!

No, you paid $3000 so that a company can use radar to track your movements at all times in your own home.

For $3025 they will let you see a tiny fraction of that data, for a whole year.
Rating: 2 Votes

redgreenski
No thank you.
Rating: 2 Votes

I find this to be a strange response. Why wouldn’t you want cameras in your home? So you’re saying if a motion gets ‘detected’, yet you can’t visually see what the motion was, then how does that provide you any type of comfort/reassurance of what caused the motion in the first place? Also, most of these motion systems available already include Camera detection, unless you À la cart your own security. [Which also isn’t common.]


For the same reasons people install glass break detectors, door and window sensors, and IR and ultrasound motion detectors-- so you can tell if someone is intruding without turning your life into the Truman Show.

The point of detecting motion isn't to be comforted, but to respond. I have no pets, so there aren't a lot of things that should set off a well tuned motion sensor-- if there is a person size motion in the home, it's probably a person.

Cameras everywhere are creepy. Why bring the surveillance state into my own home? Connecting a camera from your home to the internet is just dumb-- if you don't have complete control of that image from end to end, there's no reason to have an expectation of privacy in your own home.

And even if you do have end to end control, do people really want to visit your home knowing they're being watched everywhere they go? And if they're not being watched everywhere, what's the point? I'm making some assumptions about what this system is, or will eventually be, capable of but my expectation is that there's motion sensing in most areas where there is strong WiFi coverage (I'd guess weak coverage doesn't have enough diversity to measure much with any reliability). If you have a window in your bedroom, bathroom, or basement with no camera there, having one looking at your front door doesn't do much good-- but if you have WiFi coverage there then presumably you'd know if someone's prowling around.
Rating: 2 Votes

BWhaler
Great idea. No way on subscription though.
Rating: 2 Votes
[ Read All Comments ]