The internals of the Apple Watch Series 5 are almost identical to the internal components of the previous-generation ‌Apple Watch‌ Series 4, according to a new teardown conducted by repair site iFixit.

That should come as no surprise as the two devices are identical in design, with the major differentiating factor being the Always-On display in the newer model. 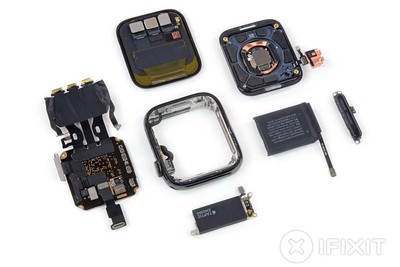 iFixit hoped to get a look at the changes implemented to allow for the Always-On display, but much of what's new relates to display technology and is "invisible to the human eye."

The site did spot a new ambient light sensor embedded under the OLED panel, and Apple says there are more advanced display drivers and an improved power management chip in the Series 5 as well.

There's a new built-in compass and the battery is slightly bigger than the battery in the Series 4 (1.4% larger in the 44mm model). The Series 5 chip includes 32GB of storage, up from 16GB, and the new compass, but it features the same GPU and CPU as the Series 4 so there are no real performance improvements.

Series 4 battery on left, Series 5 battery on right
iFixit says there are minor changes to connectors for the Taptic Engine, display, and battery, which means components are not generally interchangeable, but otherwise, the two devices are "very similar" on the inside.
Related Roundups: Apple Watch, watchOS 6
Buyer's Guide: Apple Watch (Caution)
[ 106 comments ]

Patriot24
This is a bad title/article. From the article itself:

In other words, not "Close to Identical." I get it that it isn't an earth-shattering update, but people tripping over themselves to claim this is the Series 4 with a "5" slapped on it are being disingenuous.
Score: 31 Votes (Like | Disagree)

The AOD is the huge new feature. Nothing else matters this year.
It makes Series 5 a no-brainer purchase for pretty much everyone.

Innovation at its best. On the other hand there are so many "I have to have the latest Apple fashion accessory" people that you really can't blame Apple for catering to ignorant indoctrinated buyers. After all they spend millions to make that a reality.

Or maybe after the major improvements of last years release an incremental upgrade was expected for this year. Many S4 owners will stick with last years model (myself included) and the S5 is great for people upgrading from an S3 or earlier or no watch. Do you expect a revolutionary new device packed with fresh technology every year?
Score: 9 Votes (Like | Disagree)

Steve686
So this is basically an

nt5672
Innovation at its best. On the other hand there are so many "I have to have the latest Apple fashion accessory" people that you really can't blame Apple for catering to ignorant indoctrinated buyers. After all they spend millions to make that a reality.
Score: 7 Votes (Like | Disagree)

dan9700
First Apple product in years I haven’t brought on launch and gonna skip its much darker brightness compared to S4 my mate has it and the beta didn’t help it’s not good, also the fact the s5 chip has no speed improvements is a no sale from me, always on is a gimmick

The AOD is the huge new feature. Nothing else matters this year.
It makes Series 5 a no-brainer purchase for pretty much everyone.

Not really how hard is it to touch the screen or move it to look at it, the screen on max brightness is much dimmer than s4
Score: 7 Votes (Like | Disagree)
Read All Comments

Sunday May 31, 2020 8:04 pm PDT by MacRumors Staff
Amid unrest in numerous U.S. cities following last week's killing of George Floyd by police in Minneapolis, Apple CEO Tim Cook has shared an internal memo with employees (via Bloomberg) addressing the pain that many are feeling and urging others to commit "to creating a better, more just world for everyone." Cook also announced that Apple is making donations to several groups challenging...
Read Full Article • 112 comments