Swedbank, one of the largest banks in Sweden, has announced that it will soon support Apple Pay. No specific date was provided. 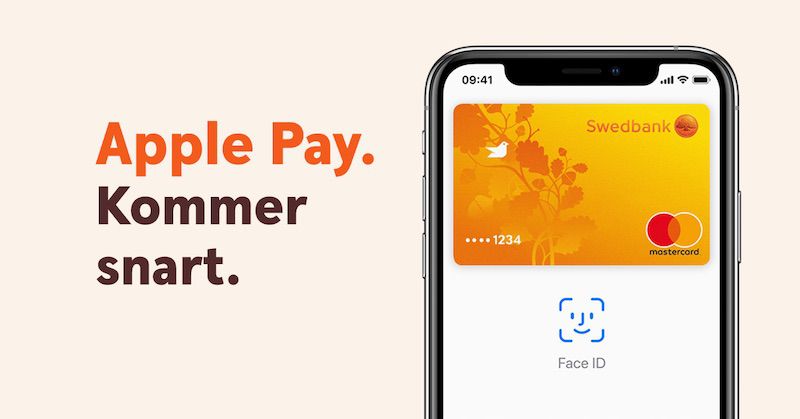 When available, users will be able to add their Swedbank credit cards to the Wallet app by tapping the plus button in the top-right corner. ‌Apple Pay‌ can be used anywhere contactless payments are accepted with a compatible iPhone or Apple Watch, and it is also accepted by select apps and websites.

‌Apple Pay‌ launched in Sweden in October 2017, and once Swedbank rolls out support, up to 4.1 million more customers will gain access to the service in the country. ‌Apple Pay‌ will be available in more than 40 countries and territories by the end of 2019, according to Apple CEO Tim Cook.

eugenijusr
This launch also covers Swedbank subsidiaries in Estonia, Latvia and Lithuania where it will be the first local brick and mortar bank to launch Apple Pay. Currently only foreign neo-banks are supported there.
[MEDIA=twitter]1176112565644144640[/MEDIA]
Rating: 3 Votes

Cool. I was on the Swedish bank that adopted Apple Pay first of all, but have never ended up using it even once. Habits. Am I right or wrong assuming it should work on all places with NFC readers? Or does it specifically require some sort of Apple logo on the terminal?


Apple Pay doesn't require specific support for in-person payments at stores and other places. It should work on all NFC readers, but make sure the merchant you're paying to honors the payment network for the card you selected to use on your device to avoid a declined transaction (for example in the USA people get a declined transaction when they try to use Apple Pay at a Costco warehouse with a credit card issued on a network other than VISA, since Costco only accepts VISA credit cards at their US locations). And also note that some older terminals whose software has not been updated to distinguish between a mobile wallet and a contactless card might still treat Apple Pay as a contactless card and apply a maximum payment amount limit, such as the 30 Euro limit in the EU countries or 30 pounds in the UK.
Rating: 2 Votes

PJM83
Finally I been waiting for this for a long time! Not a moment too soon.
Rating: 1 Votes

such as the 30 Euro limit in the EU countries or 30 pounds in the UK.

Apple Pay will be available in more than 40 countries and territories by the end of 2019, according to Apple CEO Tim Cook.


Actually, Apple Pay IS already available in more than 40 countries as of September 2019. It's available in 57 to be specific. Although more than 50 of those countries are just in Europe and Asia, we could consider that Tim’s promise is long since fulfilled (the 40 country threshold was actually surpassed last June when Apple Pay launched in 13 Eastern European countries).
Rating: 1 Votes

skitidetdu
Some stores claim to have a limit of purchase since they themselves have a cost for every transaction made by a customer but it is not allowed really.
Rating: 1 Votes
[ Read All Comments ]