It's always interesting to get a look back at Apple's past, especially when it comes to prototype devices that were never actually released to the public, so we thought we'd share some photos of a restored Macintosh Portable M5120, sent to us by Sonny Dickson. 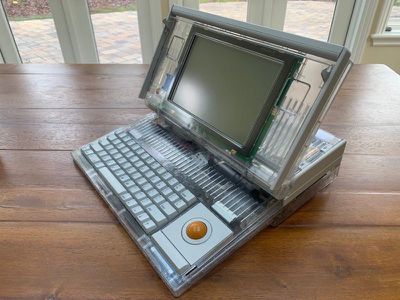 Unlike the launch version of the Macintosh Portable, which was sold in the late 1980s in a beige color, this model is a prototype made from a clear plastic material. It's been restored and it is one of only six that are known to exist.

There are no screws in the Macintosh Portable and it was designed to be taken apart with just the hands, a feat not possible with current laptop computers. It featured a 9.8-inch black and white active matrix LCD display, 9MB SRAM, a 1.44MB floppy disk drive, a typewriter-style keyboard, and a trackball setup that allowed the trackball to be positioned at either the left or the right.

A hinged design let the display be closed up over the keyboard when not in use, reminiscent of more modern laptop designs, and there's a built-in handle. The battery inside was a lead-acid battery, which, when the machines were launched, was able to last for approximately 8 to 10 hours.

After the Macintosh Portable was discontinued, Apple moved on to the PowerBook, which came out later that year.

rick3000
I like how even back then Apple though about the user experience by making the trackball work on the right or left.
Score: 5 Votes (Like | Disagree)

torontotim
I bought one of these by mail order to Canada in 1992. Seem to recall paying $1800 for it back then which was nuts, but it served me well. I took it to an ethnographic field school in Arizona, did tons of work on it, used it for a couple of years to follow till I was immersed in 'work' PCs.

Still have it. Doesn't boot, but it lights up.
Score: 4 Votes (Like | Disagree)

supergt
No buy. Waiting for it to come out in midnight green ;)
Score: 3 Votes (Like | Disagree)

16 pounds! but at least got all those ports unlike the modern generations! Those were the times!!

Not at all. All of those ports were device specific and, except for SCSI and ADB, you only got exactly one device per port. No equivalent to a USB hub.

Let's look at the ports. Most of them were Apple proprietary or at least Mac-specific: analog video, power, ADB, 2 Serial, Floppy. Only analog audio and SCSI was non-proprietary (and even then SCSI was rare in the PC world).

Except for video and power, most are handled by USB today, and all of them are replaced by USB-C. What is handled by one typical USB-C dock connection today, would be 5 separate cables (ADB, printer, modem, power, video)
Score: 3 Votes (Like | Disagree)

Khedron
Bet the keyboard is still more reliable than a new butterfly
Score: 3 Votes (Like | Disagree)
Read All Comments