Apple always live streams its iPhone events on its own Events website and the Events app on the Apple TV, but this year, for the first time, Apple also did a YouTube live stream.

Within just 10 minutes of when the event kicked off, Apple had over 500,000 viewers, and at the live stream's peak, when new iPhones were being shown off, Apple reached 1.875 million viewers. 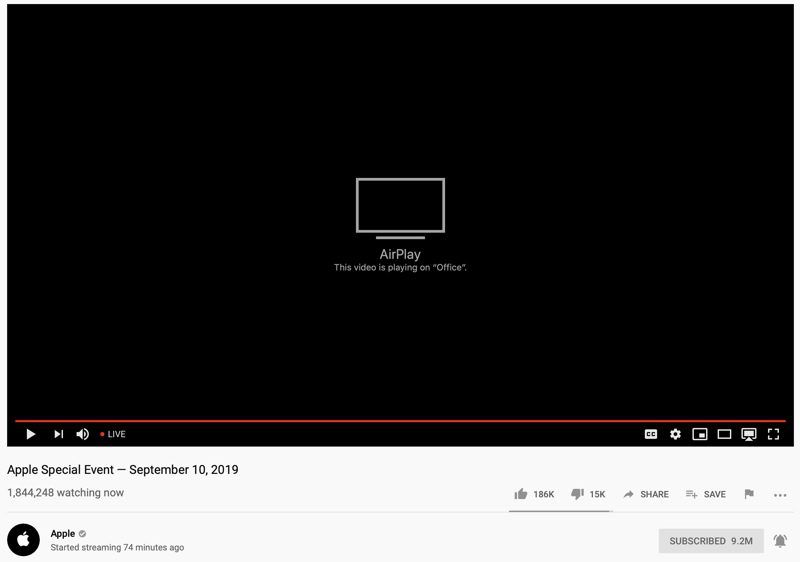 After this screenshot was taken, views climbed even higher

We've never before known how many people watch Apple's live streams because the company doesn't share that information, but the YouTube metric gives us some idea of how popular it was. For comparison, it earned more views than YouTube live streams from other companies like Samsung and Google.

The biggest YouTube live stream saw 8 million people tuning in when Felix Baumgartner jumped from a space capsule at 120,000 feet and parachuted back to the earth's surface, while SpaceX's Falcon Heavy launch in September 2018 garnered 2.3 million views.


Apple's live stream is no longer available on YouTube at the current time, but the full event video has been uploaded.

How many stayed awake?

I’m beginning to just use the MacRumors live updating post. Go ahead and check it every 5-10 minutes... certainly not worth the 90 minutes... seriously.

In all seriousness I think the keynote formula is played enough. Apple needs to innovate in that arena or just go ahead with press releases and videos online. Seriously the “we even made a video” you just spent 10 minutes talking about it, now we need a 5 minute video recap?! Seriously?!

I don’t know about the rest of you but doing these the way Apple has for the last decade is exhausting... so many other tech companies have copied it/attempted to and it’s just blah at this point.
Rating: 14 Votes

I don’t know about the rest of you but doing these the way Apple has for the last decade is exhausting... so many other tech companies have copied it/attempted to and it’s just blah at this point.


I dozed off three times watching this one and had to rewind. The last time, I didn’t even bother. This entire keynote could have been about a 15 minute affair without all the padding.

If Apple were me showing up to fourth grade, they’d be told they’re a little light on lunch money and would spend all recess hiding from the resulting punch in the stomach.
Rating: 8 Votes

GubbyMan
The quality of the live stream on Apple's website was so much better than YouTube's 1080p stream. YouTube had horrible compression artifacts whenever there was a dark background.
Rating: 6 Votes

DakotaGuy
I couldn't watch it live because I was busy at work trying to make money to buy this stuff.
Rating: 5 Votes

rjohnstone
The stream from Apple was horrible. Audio kept going out of sync or dropped out all together.
Didn’t see anything worth upgrading my Xs for.
Why they kept the Series 3 watches around, yet dropped the Series 4 is beyond me.
Rating: 3 Votes

GuruZac
I admittedly am always excited to see these Apple events, but this was the first one where I wasn't impressed by anything. Everything is very iterative with Apple, and leaked well ahead of time that it's lost the excitement. I think that is the general state of the industry though.

The two big takeaways for me was impressive specs and phone with the iPhone 11. It will undoubtedly sell well, if not better than the XR. And the Watch Series 5 with always on display.
[doublepost=1568161132][/doublepost]

The stream from Apple was horrible. Audio kept going out of sync or dropped out all together.
Didn’t see anything worth upgrading my Xs for.
Why they kept the Series 3 watches around, yet dropped the Series 4 is beyond me.

Didn't see anything worth upgrading my XR for. Now that Apple has dropped 3D Touch from the Pros and added Haptic Touch in iOS 13 to the XR, I'm not missing anything. ProCamera has updated their app which has really improved Portrait Mode for non-human subjects, so the second lens is not missed nearly as much. Battery life and speed are already out of the park on the XR, and their were no really updates to the screen.

now i see it
One of the big reasons is that older versions of iOS & hardware were blocked from streaming on Apple's website.

I wonder how many people had enough patience to watch it to the bitter end. About half way through the iPhone presentation with Phil, I had to turn it off. Too freaking tedious.
Rating: 2 Votes

Rojaaemon
I'm trying to watch the event. Five minutes in and I'm already bored by the first presenter, some Asian woman who has never appeared before and has nothing interesting to say about something I care nothing about. Honestly, it seems like they are just trying to up their diversity score with their presenters rather than innovate with products.

Next two grown men are showing me how to play "frogger" and are "deflecting jelly beans" and I see that there are over 90 minutes to go in the show. But I'm done. It's torture to watch it.
Rating: 1 Votes
[ Read All Comments ]