Friday September 6, 2019 1:02 pm PDT by Juli Clover
Apple's iconic Fifth Avenue store in New York City has been undergoing renovations since 2017, with Apple having dismantled the glass cube building design that the location is known for.

The Fifth Avenue store, which was relocated nearby during the renovation period, is reopening soon and the well-known glass cube has been reconstructed. To celebrate the launch of the updated flagship location, Apple has covered the cube in an eye-catching rainbow film. 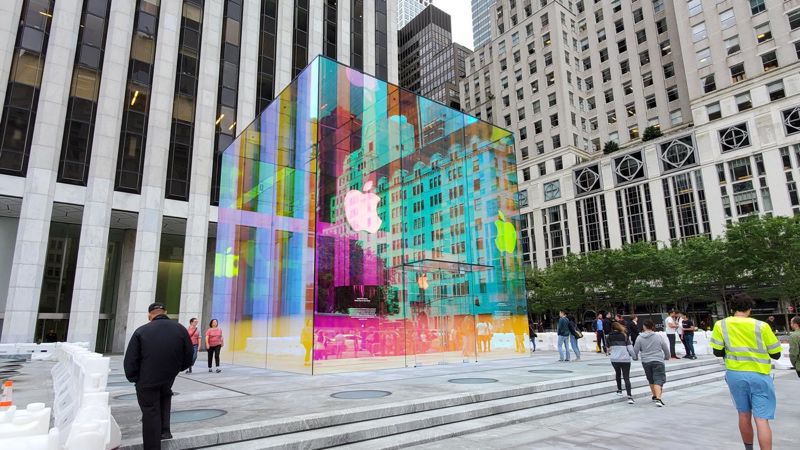 The rainbow cover of the cube obstructs what's going on below, but Apple has been working to double the size of its Fifth Avenue store, which is underground and accessed by elevator.


According to Quartz, a sticker on the outside of the rainbow wrap reads:

Beneath the surface of Fifth Avenue, you'll soon discover a reimagined space where creativity is always welcome. A 24-hour store with doors open to the bright lights and big ideas of this city, ready to inspire what you can do, discover, and make next.

There's no word yet on when Apple Fifth Avenue will reopen, but with the glass cube back in place and sporting rainbow colors, it could come at any time. Quartz saw a film crew nearby the cube, and one of the crew members said that Apple was filming "a new commercial" for the store's relaunch.


Unfortunately, the new rainbow look of the glass cube is temporary. An Apple spokesman told CNBC that the colors will eventually be removed and the cube will be clear again.

Apple Fifth Avenue is a major flagship store and its reopening will likely be a big deal, so it's possible Apple will share details on the location at its Tuesday, September 10 event.

hopegrad
Seems possible the color scheme coincides with the announcements coming next week. The color palate involved looks quite similar to what we see on the invitations too.
Rating: 14 Votes

mannyvel
The story behind this store is one of the greatest real-estate deals ever and shows the power of Steve Jobs' imagination.
Rating: 11 Votes

grantwall
This definitely makes me think they'll be bringing back the rainbow logo.
Rating: 7 Votes

They closed this down for a while and spent a zillion dollars, but it still looks like the same cube that was there before.


The cube is the same. They rebuilt the entire store underground from scratch, doubling its size. The plaza now has portholes that will allow natural light to the store below.
Rating: 5 Votes

The glass structure is the only thing about the store that is impressive. The inside is less than impressive.


You do realize that the actual store below ground more than doubled in size and is completely different. Some of y’all just talk to talk.
[doublepost=1567801711][/doublepost]

They closed this down for a while and spent a zillion dollars, but it still looks like the same cube that was there before.


Yeah uhhh the plaza is actually different and the store below is entirely different, but carry on.
[doublepost=1567801774][/doublepost]

That moment when Apple puts more effort into their building exteriors than they do their new iPhones. LOL

Bawstun
That moment when Apple puts more effort into their building exteriors than they do their new iPhones. LOL
Rating: 4 Votes

Also, hopefully this isn't a PRSI-worthy comment but if I wasn't told anything I would guess they are preparing for a VP Mike Pence visit.
Rating: 4 Votes

hagjohn
The glass structure is the only thing about the store that is impressive. The inside is less than impressive.
Rating: 4 Votes

What's in the building to the right with the Apple logo on it? Temporary Apple store?


Yep, that's the old FAO Schwartz store. May the Schwartz be with you!
Rating: 3 Votes

macduke
That's actually kinda cool. I like how it pops from the drab city around it without being too crazy. It was already pretty huge underneath for an underground complex. I'm looking forward to seeing the new expansion someday.
Rating: 3 Votes