Undeterred by its recent Galaxy Fold un-launch, Samsung is apparently set to unveil a luxury smartphone early next year that can be folded down into a compact-sized square, according to a new report from Bloomberg. 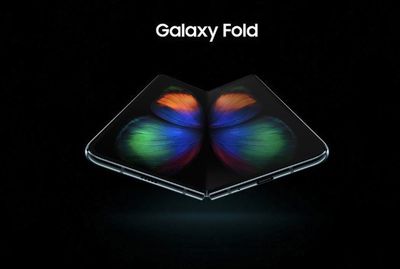 Samsung's Galaxy Fold hasn't even been released yet

The South Korean smartphone giant is working on a device with a 6.7-inch inner display that shrinks to a pocketable square when it's folded inward like a clamshell, according to people familiar with the product's development.

The smartphone giant is said to be collaborating with American designer Thom Browne on the upcoming phone, with the aim of "appealing to a broader range of consumers that includes those more interested in fashion, status and luxury than a device's tech specs." At the same time, the device will reportedly feature cutting-edge display technology and offer the nostalgic appeal of rejuvenating the flip-phone form factor.

The foldable phone is said to include a hole-punch selfie camera at the top of the inner display, while on the outside it will have two cameras that face rearwards when the phone is open and become front-facing when the device is flipped closed.

According to the paper's sources, Samsung aims to make its second bendable smartphone more affordable and thinner than this year's Galaxy Fold, although the launch of the successor device "may... hinge on how well the Fold performs after its imminent launch."

On that note, Samsung is said to have completed its redesign of the Galaxy Fold to resolve the multiple display failures that led to its delay. The South Korean company originally planned to roll out its $1,980 foldable phone on April 26, but was forced to delay the launch after several units sent out to reviewers broke during testing.

All of the issues were related to the device's screen, which was vulnerable to debris ingress. The new version of the Galaxy Fold, featuring several design and construction improvements, is now set to launch in September in select markets, with specific launch details to be shared as a launch approaches.

There have been some suggestions that Apple is exploring folding screen technology, but right now there are no rumors indicating Apple plans to actually release a foldable smartphone in the near future.

Turns out the answer is a huge crease down the center of the screen.
Score: 16 Votes (Like | Disagree)

ChrisMoBro
It worked out so well with the last foldable phone...
Score: 10 Votes (Like | Disagree)

Gaprofitt
Fanboys so jealous other companies are being innovative while Apple hasnt introduced anything appealing in years.
Score: 7 Votes (Like | Disagree)

Saying they are not interested and don’t see a real use is jealous? :confused:
Score: 5 Votes (Like | Disagree)

Fixey
All talk, they bragged about the last one, never sold now they’re bragging about a new one when we never got the first one.

Wait for foldable glass to be finalised and wait for more testing on OLED being folded just too early and irresponsible to release such a product but with Samsung that’s a none issue and we don’t have to worry because they will never release it just talk talk talk could not bring it to market guess what technology not ready yet what a surprise Samsung told you so
Score: 5 Votes (Like | Disagree)

I'll wait 12 months after the launch of this device to tell you whether I am indeed jealous of it or not.

Currently my instincts point me to 'not'.
Score: 5 Votes (Like | Disagree)
Read All Comments