The result, spotted by forum member EugW, lists a model number of "iPhone12,1" running iOS 13.1 with a motherboard identifier of N104AP. Back in May, Bloomberg reported that the next-generation ‌iPhone‌ XR was internally codenamed N104, while 9to5Mac reported in July that the device would carry the model number iPhone12,1. 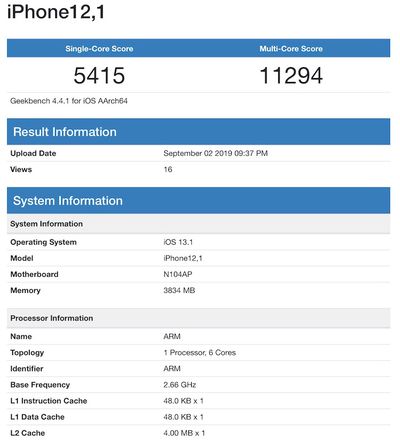 If legitimate, the result reveals a few details about the ‌iPhone‌ XR successor and its A13 chip. First, the result shows approximately 4 GB of RAM for the device, which would be an increase over the 3 GB found in the current ‌iPhone‌ XR and in line with predictions from noted analyst Ming-Chi Kuo. The ‌iPhone‌ XS and XS Max already include 4 GB of RAM, and there have not been any solid rumors suggesting their successors will see an increase.

Moving on to the A13 itself, the result indicates it continues to include six cores, presumably in an identical setup compared to the A12 with two high-performance cores and four high-efficiency cores.

Interestingly, the A13's multi-core score of 11294 is nearly identical to the A12's average score of 11192, although Geekbench's developer John Poole tells us there could be some throttling due to thermal limits as similar situations have been seen with the A12 in the ‌iPhone‌ XS and XR, so we may have to wait for more data to see where the A13 truly tops out.

Careful observers will note oddly low figures for the L1 and L2 caches on this A13, but Poole tells us Geekbench has difficulty telling whether the cache values it reads are for the high-performance or high-efficiency cores, particularly on unreleased hardware for which the software hasn't been optimized.

While we can't confirm whether the Geekbench result is legitimate, as results certainly can be faked, all of the data appears reasonable or explainable and Poole tells us "there's nothing obviously wrong with the result."

We'll know more with the unveiling of all three of the new iPhones at Apple's media event on September 10, although Apple is unlikely to share specifics on chip speeds and RAM amounts. It won't take long, however, for additional data to surface confirming specs for the new devices.

Reaching the limits of speed on these tiny devices.

I don’t think it’s a limit of speed, but rather of what we are requiring of these devices.

Between 2011-14 we were really pushing our iPhones with the many new features and apps pushing these limits (1080p then 4K video, 400+ ppi screens, and previous-gen console ports - think GTA 3/VC/SA/LCS, Bully, various NFS releases and even Bioshock).

Since 2015 I think Apple has added Portrait Mode to the iPhone and that’s it. The console port scene is dead. What other new app has really required additional horsepower from our iPhones? Pretty much all users are using some combination of push mail/social networking/music streaming/video streaming - which even an iPhone SE can do well.
Score: 16 Votes (Like | Disagree)

EugW
Nice to see the comments from Poole indicating this could be legitimate.

d5aqoëp
Reaching the limits of speed on these tiny devices.
Score: 8 Votes (Like | Disagree)

They sort of are. New processes do not offer higher performance anymore (at least not the way it happened before). They do let the designers to pack more transistors on the die and indirectly (by using more cores) increase the performance but only for multi-thread/process scenarios. At least this is my impression about the latest process nodes.

There is no stalling the A-processor performance. We are talking about the XR-successor here. You should expect much more from Pro.

This is not a new phenomena - it’s been going on for years. If all that mattered was clock rate you’d end up with something like the GaAs F-RISC research project at Rensselaer. Super-high clock rates at the time, terrible CPU performance.
[doublepost=1567486406][/doublepost]

Meaningless when there's no software (on Android anyway) that could actually run all cores at once.
[doublepost=1567485420][/doublepost]
Rumor is the A13 is TSMC 7nm+ EUV (where some of the chip is done using EUV).

EUV should buy them something like 10-15% performance or power (I imagine they’ll optimize for power, and increase the clock rate a bit by shrinking the critical paths, while also improving IPC with bigger caches/buffers and maybe some minor micro architectural changes. Most of the new stuff will be in the co-processors, which won’t show up in current benchmark testing that isn’t optimized to use the hardware).
Score: 7 Votes (Like | Disagree)

roland.g
I realize that the iPhone XR successor may be in some ways (camera, screen) a step down even from the original iPhone X (or at least a lateral move as the XR tech improves), but for me I think it may be a real consideration as a previous 6 Plus and 7 Plus owner for a slightly wider screen (I think in many ways that the XR size is the sweet spot in the lineup) as the X can feel a bit small. While I know the XS Max is about the same body size as the prior Plus models, I don’t really want to go putting something of that size back in my pocket all the time and with iPhones now full screen I can’t imagine the top of the XS Max is all that easy to use one handed.
Score: 7 Votes (Like | Disagree)
Read All Comments